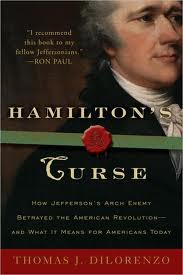 The Creed of a Character Assassin

Thomas J. DiLorenzo (TJD) is the author of a book called Hamilton's Curse (http:/www.amzn.com/0307382850), published in 2008, which channels the spirit of Aaron Burr to assassinate the character of Alexander Hamilton.  The book masquerades as a work on history but is, in fact, a polemic against Alexander Hamilton (Just as Evan Thomas' The War Lovers was a polemic against Teddy Roosevelt, et al. -- sea earlier post Remember the Maine, Forget The War Lovers 2/20/12.) -- our nation's first and greatest Treasury Secretary.  TJD's wildly-biased account of history finds Hamilton culpable for nearly every ill afflicting the USA from Wilson's imposition of the income tax to FDR's New Deal to corporate welfare.  TJD is a pro-seccessionist, CSA apologist and rabidly libertarian supporter of Ron Paul.

The author's ignorance or abuse of the historical record is quite shocking.  Hamilton is described and "an aristocratic New Yorker" even though he was an illegitimate child born on Nevis in the Caribbean who was orphaned at age 11. (http://en.wikipedia.org/wiki/Alexander_Hamilton)  He grew up on St. Croix and the key to his identity was that he identified not with any one particular colony, but rather he was the outsider who became an American.  In Hamilton, general Washington found the son he never had and, in Washington, Hamilton found the best of fathers.

It is "passing strange" how Ron Paul and his supporters (Ron Paul blurbs breathlessly on the book's cover, "I recommend this book to my fellow Jeffersonians.") profess a reverence for the US Constitution, but, at the same time, have nothing but contempt for one of its authors and greatest supporters.  Writing in the Federalist Papers, which were written in support of the Constitution's ratification, Hamilton declared, "Energy in the Executive is a leading character in the definition of good government. It is essential to the protection of the community against foreign attacks; it is not less essential to the steady administration of the laws; to the protection of property against those irregular and high-handed combinations which sometimes interrupt the ordinary course of justice; to the security of liberty against the enterprises and assaults of ambition, of faction, and of anarchy."  (See earlier post American Bias for Action, 3/12/12)

TJD sets up a cartoonish contrast between the evil statist Hamilton who tortures the US Constitution to advance his own ends and the virtuous Libertarian Jefferson who is a "strict constructionist".  Jefferson did, indeed, philosophize that "Government governs best which governs least" when he was in opposition during the Adams administration.  When he became President, however, he spent $15million to double the size of the original 13 colonies at 10 cents and acre with the Lousiana purchase -- authorisation for which is impossible to find in the US Constitution.  Though TJD accuses Hamilton of imperial ambitions, it was Jefferson who commissioned Lewis and Clark to explore and chart America's course to the Pacific.  Jefferson also imposed steep tariffs that put Hamilton's "protectionist' efforts to shame.  Jefferson launched America's first war, without congressional consent, against the Barbary pirates.  In short, Jefferson as President, was the very embodiment of Hamiltonian "energy in the executive".

Moreover, Hamilton, who TJD labels a "monarchist" was chiefly responsible for setting up the US institution of the Presidency -- an office for which he himself was ineligible on account of his foreign birth.  Does that sound like the action of a scheming power-mad monarchist?

Hamilton's Curse is simply sloppy history with an axe to grind.  TJD quotes from Buchanan and Wagner's Democracy in Deficit "'after 1964, the United States embarked on a course of fiscal irresponsibility matched by no other period it its two century history.' The year 1964 is significant because it was during the Kennedy administration that Keynsian economists achieved their greatest influence."  Perhaps the author has forgotten the events of Novmber 22nd, 1963?


Here is what financial historian Robert E. Wright has to say about TJD's book..."Far from being "the champion of the Leviathan State", Hamilton was a libertarian mugged by reality. He learned from hard experience that a limp-wristed state was just as big a threat to liberty as an autocracy. He therefore sought to create a vigorous government that could protect life, liberty, and property. But that is where he drew the line, and that is the right place to draw it. He wanted privately owned and operated banks, insurers, factories, even roads and bridges. He did not espouse the creation of a social safety net, income taxes, or free floating government fiat paper money.

As I argue in One Nation Under Debt, Hamilton wanted a government that was big only compared to what Jefferson wanted. Compared to today's behemoth, he wanted a tiny government, Jefferson a teensy one. Both would be with Ron Paul today. This is why TJD has to claim that it took "the relentless efforts of generations of his political heirs to install Hamiltonianism for good in this country".  Hamilton, by this definition, was no Hamiltonian! Again, TJD confuses what Hamilton really wanted with the use that others later made of his name. If TJD would have taken the time to read the original sources, or at least the relevant secondary literature (see above), he would have seen this and found a more appropriate scapegoat for his well justified abhorrence of the status quo." Review of Hamiton's Curse by Robert E. Wright, March 7th, 2009 http://financehistoryandpolicy.blogspot.co.uk/2009/03/review-of-hamiltons-curse-by-thomas-j.html

In his earlier works (e.g. The Real Lincoln: A New Look at Abraham Lincoln, His Agenda, and an Unnecessary War) TJD channels the spirit of John Wilkes Booth ("Sic Semper Tyrannus") to assassinate Lincoln's character.  TJD repeats his now familiar, though unpersuasive, rants which cast Lincoln as a tyrant.  TJD identifies Lincoln as Hamiltonian and accuses him of all manner of transgressions against the Constitution, but it was, in fact, Lincoln who saved the Constitution and preserved the Union. As Lincoln said, "the constitution is not a suicide pact".   It was the English Philosopher, Edmund Burke, who made Lincoln's case (Reflections on the Revolution in France, 1790) with this observation about the true nature of the state...

It was surely about this type of partnership that Lincoln had in mind when he gave his first inaugural in which he addressed to his fellow Americans in the South saying, "We are not enemies, but friends. We must not be enemies. Though passion may have strained it must not break our bonds of affection. The mystic chords of memory, stretching from every battlefield and patriot grave to every living heart and hearthstone all over this broad land, will yet swell the chorus of the Union, when again touched, as surely they will be, by the better angels of our nature."

TJD accuses Teddy Roosevelt of being 'Hamiltonian' as well.  "Teddy Roosevelt was a 'progressive era' president (and admirer of Hamilton) who is credited with being a great environmentalist for having nationalised thousands of acres of land and built dams and other 'conservation' projects with taxpayer dollars."  So the US National Parks system is a socialist scheme brought to us by "red Ted" in TJD's eyes! (See earlier post, Conservatism and the Environment, 2/12/12)

Why was Alexander Hamilton one of the greatest founding fathers?  He was the principal author of the Federalist Papers which were instrumental in getting the US Constitution ratified by the 13 colonies.  He was one of the principal architects of the constitution.  He insisted that the US government repay its debts and helped to create the mechanism for restoring the full faith and credit of the United States.  He created a stable currency.  He helped shape the system of checks and balances which included an energetic executive branch (The Presidency) without which the United States would be unthinkable.  He helped rid us of the Articles of Confederation which formed a hopelessly unworkable system of government and would have gotten even worse (e.g. 13 or 50 different trade and foreign policies).  Hamilton was a staunch opponent of slavery, a champion of liberty.  He laid the foundation for property rights and modern capitalism.  Hamilton provided the necessary hard-headed realism that balanced Jefferson's soaring rhetoric of Liberty.

TJD and his fellow Paul-bots seem to share a quaint nostalgia for the Articles of Confederation and for a Jefffersonian agrarian utopia that never really was.  I am looking forward to TJD's next books which I venture to predict will be either, George Washington Unmasked: Founding Father of Socialism or Spartacus -- an Unnecessary Rebellion!

For an additional take on Hamilton's Curse this is an interesting review...
http://www.openlettersmonthly.com/february-2009-hamiltons-curse/

If you are really interested in learning more about Hamilton you can't do better than Chernow's Hamilton.  http:/www.amzn.com/0143034758


Christopher Hitchens on Jefferson
Posted by Commander Kelly at 4:41 AM

eToro is the ultimate forex broker for new and established traders.

Start following our signals NOW & profit up to 270% daily.