“This is the lesson: never give in,
Never, never, never, never – in nothing, great or small,
Large or petty—never give in except to convictions of
Honor and good sense.  Never yield to force: never yield
To the apparently overwhelming might of the enemy.
God bless you all.  This is your victory!"

About a week prior to VE Day, Adolf Hitler had committed suicide in his bunker on April 30, 1945. About three months later, VJ Day, marking Victory over Imperial Japan would be celebrated around the world.

By August 1945 the worst war in human history came to an end.  Finally, many Americans and other Allied soldiers would return from captivity in German and Japanese POW camps.  At last young men would be re-united with their families.  Demobilization would follow as the troops began to come home to the states.  The GI bill would kick in and millions of world-weary soldiers would be transformed into students.

Over the course of just under four years over 16 million American men and women had served in some capacity in the war.  Today in 2015, less than one million WW2 service vets are still alive.

Just over 400,00 mostly young Americans would never return from their duties in the Second World War.  Many are buried overseas in twenty-four different overseas cemeteries in eleven different countries.  (http://www.abmc.gov/)

Most of us know about the carnage that took place on Omaha beach on D-Day, June 6, 1944.  But there are many nearly forgotten stories of World War II that deserve to be remembered.  For example…

1) How the USS Wasp helped deliver Spitfire aircraft to the beleaguered island of      Malta during its long three year siege and bombardment by Axis forces. Later that year, the Wasp would be torpedoed and sunk by a Japanese submarine.

2) How in the invasion of Sicily nearly 1,400 Americans were killed by friendly fire on July 10, 1943 when the 504th Parachute Regiment was hit by naval gunfire.

3) How black and white Stripes would be painted on the undercarriage of all Allied that flew on D-day in order to avoid a repeat of what happened in Sicily.  Look for the D-day stripes on airplanes in your local aviation museum.

4) How in September 1944 young Americans invaded the tiny 13 square mile island of Peleliu in a country (Palau) that most of us have never heard of.

On of the ironies of World War II was that American forces in Europe were led by a Supreme Allied Commander, Dwight D. Eisenhower, who was of German descent.  Grosvenor Square in London, where the D-day landing were planned, was referred to by local wags as “Eisenhowerplatz”.  Today it is the home of the American Embassy in London.

This is why we must always remember and teach our children about VE day and its eternal significance to freedom-loving people around the world. 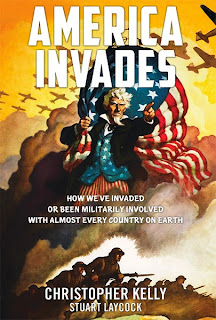