Mission: Jimmy Stewart and the Fight for Europe

Robert Matzen's Mission: Jimmy Stewart and the Fight for Europe was published in 2016 (https://www.amazon.com/Mission-Jimmy-Stewart-Fight-Europe/dp/173227357X/ref=tmm_pap_swatch_0?_encoding=UTF8&qid=1638016209&sr=8-1).  Jimmy Stewart was a remarkable American actor and a remarkable man as well.  Stewart's family had a strong military tradition.  His grandfather, the original James Stewart, served in the Union army in the US Civil War with Phil Sheridan.  His father, Alex, had served as a doughboy in the American Expeditionary forces in WWI.

Jimmy Stewart seemed to be on an altogether different life path.  He attended Princeton University where he participated in theatrical programs.  He became a close friend of Henry Fonda.  This Pennsylvania native moved west to Hollywood to pursue a career in film acting.  Stewart shot to the top of his profession.  In 1941 he won an academy award for best actor for his role in The Philadelphia Story.

But the drumbeat of war did not escape the attention of Stewart who had trained as a pilot in preparation for war.  In March of 1941, months before the attack on Pearl Harbor, Stewart received an ORDER TO REPORT FOR INDUCTION as a US Army reservist.  Though he was 33 years old in 1941 and considerably older that his peers in U.S. Army Air Corps but Stewart was determined to become an active duty pilot.  He even defied the wishes of his studio boss Louis B. Mayer who had hoped to keep Stewart safe and stateside making propaganda pictures during the war.

Stewart was training at Moffett Field in California when the Japanese attacked Pearl Harbor.  He later trained at Gowen Field in Idaho and Kirkland Field in New Mexico.

After his training, Stewart was posted to Tibenham in East Anglia in the UK.  Stewart piloted a B-24 Liberator bomber in the 445th Bomb Group of the "Mighty" 8th Army Air Force.  The B-24 was a notoriously difficult plane to fly.  Stewart mastered the tricky plane and flew in twenty combat missions over Nazi occupied Europe.  He served as a chief of staff for missions that bombed targets in occupied France prior to the Normandy invasion in June 1944.  Nor did he seek publicity for his wartime service while in the military.

Flying daylight bombing missions was incredibly hazardous.  The Germans sent up a cloud to flak from their AA guns positioned all over occupied Europe.  Luftwaffe pilots were usually experienced and well equipped.  The Fock Wolf 190 was a fast and capable interceptor.  The final stages of the war saw the introduction of German jet fighters such as ME-262 that could reach speeds of 515 mph.  Stewart's final mission involved bombing a jet fighter factory near Achmer.

In addition to enemy action, simply flying the Liberator in formation could be extremely hazardous.  Accidents cost many lives in the course of the war.  The Sunflower Sue, for example, was lost with its crew of ten and four passengers while flying over the Caribbean en route from Puerto Rico to British Guyana.

Jimmy Stewart earned the silver eagles of a full colonel.  In that capacity he wrote many condolence letters to the families of downed airmen.

After the war was over and Stewart was discharged he refused to talk to the press about his wartime experiences.  He never sought to profit from his war service in any way.  He continued to serve in the reserve.  During the Vietnam War he rose to the rank of Brigadier General in the US Air Force.  He flew on a B-52 mission over Vietnam as an observer.

In 1946 Stewart starred as George Bailey in Frank Capra's It's a Wonderful Life.  Ironically, Bailey, despite his severe wanderlust, stayed home and built up the Building and Loan while his brother went off to war.  The film received scant attention at the time but went on to become a Christmas classic.  Stewart had been a witness to the full horrors of war and these experiences unquestionably deepened and informed his acting. Matzen's book barely mentions the incredible work that Stewart did with Alfred Hitchcock in Vertigo and Rear Window. But these dark haunting performances would have been unthinkable without Stewart's searing experience in WW2.

Matzen's book is not a balanced biography of Jimmy Stewart.  Clearly it focuses on Stewart's years of service in WW2.  It barely touches on his post war acting career or his marriage to Gloria Hatrick McLean.   Jimmy was a stepfather to Gloria's two sons.  The couple also had two daughters.  His stepson, Ronald McLean, was killed in 1969 Vietnam while serving as a Marine officer.  President Reagan promoted Stewart to the rank of Major General.

Matzen unaccountably neglects to mention that Walter Matthau (1920 - 2000) also served in the 453rd Bomber Group as a radioman-gunner.  But these are minor quibbles as Matzen's Mission is a Wonderful story about a truly Wonderful Life.

Posted by Commander Kelly at 11:53 AM No comments:

The General vs. The President 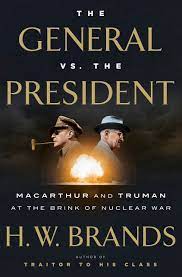 Posted by Commander Kelly at 6:17 AM No comments: 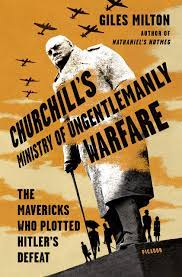 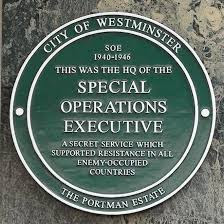 This is the story of the SOE -- the Special Operations Executive.  This was a bland name for a spicy unit that  took on extraordinary risks in WW2.  Following the fall of France, amidst some of the darkest days of the war, Winston Churchill conceived the SOE.  They would be trained in the dark arts of guerrilla warfare.  They would strike deep behind enemy lines.  They would use cutting edge technology.  And they would take enormous risks to strike back at an Axis that seemed to have a firm grip on the European mainland.  Churchill, frustrated by his inability to win a conventional war, asked them simply to "set Europe ablaze" by unconventional means.   Giles Milton's volume shows us exactly how they responded to Churchill's request.

Collin Gubbins was the intrepid head of the SOE.  In August of 1941 he saw off "Operation Postmaster" that set out in a fishing trawler with the Bondian name "Maid Honor" to fence with German U-boats off the coast of West Africa.  This expedition, led by Gus March Phillipps did not sink any U-boats.  Instead March-Phillipps led a daring cutting out expedition with two tugboats that captured an Italian ship (Duchessa d'Aosta) and two German vessels in Spanish-controlled equatorial Guinea in the dead of night.  The Italian captain of the captured ship had been drinking with his German colleagues in the nearby Casino Terrace restaurant.  Gubbins' crew scattered Free French kepis into the waters before they made off in order to muddy the waters.  British diplomatic authorities, concerned about the neutrally of Franco's Spain, lied through their teeth about the raid -- "in no way responsible for what happened prior to the capture of the enemy vessels on the high seas."  Milton neglects to mention that March-Phillipps was sadly killed the following year while leading a commando raid on the coast of occupied France.

This book is full of hair raising tales.  SOE trained agents were responsible for the assassination of Reinhard Heydrich in Czechosloavakia.  Brutal Nazi retribution followed in the wake of this incident.

SOE even managed to persuade the owners and managers of the Peugeot factory in Sochaux France that it would be better for their factories (manufacturing tanks) to be sabotaged rather than bombed from the air.  An earlier air raid on the target had killed around 125 civilians.  In November 1943 Rodolphe Peugeot agreed to have his own factory destroyed!

The SOE (along with the American OSS and French Resistance) played an important role in the widespread sabotage prior to and immediately following the D-Day invasion of June 1944.  These activities slowed German attempts to mount an effective counterattack to the Allied beachhead.  See also the Art of Resistance...https://www.blogger.com/blog/post/edit/4122629330054677829/771004067849140658

Giles Milton neglects to mention Violet Szabo, an SOE operative, who was killed by the Nazis in 1945.  2021 marks the hundredth anniversary of the birth of this amazing and courageous woman.

This book offers another reason to admire Churchill and all of those who fought in defense of Freedom in the World War II.

Posted by Commander Kelly at 4:38 PM No comments: