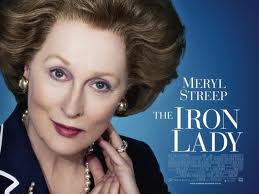 I am just back from having seen the matinee of Iron Lady at Leceister Square with some friends.  I think that Meryl Streep did an outstanding job as Margaraet Thatcher.  She is a "lefty" American actress who gave a sympathetic and sometimes uncanny portrayal of a "righty" English politician.  Streep did an awesome job on getting the Thatcher voice right.  She may well be nominated for an Academy award.

The movie has some terrific highlights including the Falklands scenes, the scenes in Parliament and the scene with US Secretary of State Al Haig ("Shall I be mother?" while offering to pour tea--my favourite line of the film).  Against the backdrop of contemporary US politics, it is hard not to long fruitlessly for the opportunity to cast a vote for a Thatcher-like creature in the current Republican primaries.

I remember living in Chelsea in 1970 as a boy and seeing the mounds of uncollected trash bags piled high on the sidewalks due to disruptive trade union activity.  My father, a television executive, would furtively take the trash out at night and sneak 8 blocs away to the Sloane Square tube stop to dispose of our trash.  During the holiday season one clever man carefully gift wrapped his trash and put it in the back seat of his unlocked car, sure in the knowledge that it would be stolen.  Iron Lady presents some of the incredible havoc that the trade unions visited upon the UK during the 1970's, including the horrors of the garbage strike.

The movie deserves much credit for simply taking the Thatcher phenomenon seriously.  She led Britain to victory in the Falklands, broke the backs of the trade unions, restored the British economy, dramatically increased the rate of home ownership, steered Britain clear of the Euro Chimera and was part of the triumvirate (along with Reagan and Pope John Paul) that won the cold war without firing a shot.  I am old enough to remember the joke told in the 1980's about how "Thatcher knew so little about foreign policy that she thought that 'Sinai' was the plural of sinus."  Much like Sarah Palin, ("I can see Russia from my porch") she was fodder for television cartoon shows and West end productions like Billy Elliot.  This movie, at least, takes her with the seriousness that she deserves.

Sadly, the movie dwells far too long on Thatcher's alleged dementia.  Imagine if a Ronald Reagan biopic chose to focus primarily upon his post-Presidency battle with Alzheimer's.  Would Reagan idolaters or haters be satisfied with such a treatment?  This movie seems focus group generated in a most unfortunate manner.  "We need to soften MT's acerbic personality by showing her vulnerabilities and playing up the love story.  This will be sure to attract the 35+ ladies who might buy a ticket."

The highly fictionalised scenes with a deceased Dennis Thatcher, played by the very talented Jim Broadbent, detract from the film's credibility.  The repeated scenes of an angry mob attacking Thatcher's automobile are wholly invented as well.

The movie largely misses the opportunity to play on the tremendous drama of the Brighton conference bombing which nearly killed Thatcher.  Where is her business as usual speech that came one day after the IRA bombing attempt?  Her role in helping to win the cold war is very lightly glossed over.  The deployment of Pershing missiles in the UK was hugely controversial at the time.  She stood shoulder to shoulder with Reagan who is also given unaccountably short shrift in this account.  Her whole relationship with Reagan is depicted in one brief dance scene.

The movie's unforgivable sin is that it somehow manages to make Thatcher seem dull, when she was, in fact, anything but.

If you ever wondered why there are practically no garbage cans on the streets of London, this movie will lay it out for you.  Blame the bloody Irish and their infernal devices!

Polls suggest that Thatcher is today regarded as Britain's most popular prime minister with the sole exception of Winston Churchill.  The rise of a grocers's daughter from Grantham to this eminence in a male dominated world is tremendous dramatic raw material that was ill served by the producers of this film.   It could just have been so much better.

FALKLANDS POSTSCRIPT.  The Falklands war scenes of Iron Lady are an interesting reminder of that conflict.  In 1982 when the battle over Falklands Islands was being fought the UK possessed a credible military force that got the job done.  Some 28,000 men were dispatched an ocean away to deal with the "Argies."  The Royal navy had an aircraft carrier which proved essential air support in the conflict.  Fast forward to 2012, and the UK has no aircraft carrier (the mothballed Ark Royal is for sale on a version of E-bay) and won't for the next ten years.  In 1982 the war was fought over some barren, windswept, scarcely populated islands.  Today they have discovered offshore oil in the territorial waters off the Falklands.  There is now actually something there to fight over.  Is trouble again brewing in the South Atlantic?  Not to worry, the Brits have deal to borrow a carrier from the Frogs in a pinch!
Posted by Commander Kelly at 1:17 PM