"In August 2005, BBC Radio 4 ran a poll to find the nation's (Britain's) favorite painting.  It was won by Turner's The Fighting Temeraire Tugged To Her Last Berth To Be Broken Up, 1838, and it won by a landslide: it received over a quarter of all votes cast, fighting off Constable's The Hay Wain and other equally well-known works by Manet, Hockney and Van Gogh.  Turner was a genius whose techniques revolutionised art history, and The Fighting Temeraire is his masterpiece.  It is one of the greatest works of art ever created by a Western artist."*

You can find The Fighting Termeraire today in London's National Gallery (www.nationalgallery.org.uk/) right on Trafalgar square.

The author, William Thackeray, described the painting as follows...

"The Old Temeraire is dragged to her last home by a little, pitiful, diabolical steamer. A mighty red sun, amidst a host of flaring clouds, sinks to rest on one side of the picture, and illumines a river that seems interminable, and a countless navy that fades away into such a wonderful distance as never was painted before.  The little demon of a steamer is belching out a volume (why do I say a volume? Not a hundred volumes could express it) of foul, lurid, red-hot, malignant smoke, paddling furiously and lashing up the water round about it; while behind it (a cold grey moon looking down on it) slow, sad and majestic, follows the brave old ship, with death, as it were written on her..."

The ship Temeraire, which is the paintings' primary subject, served in the Royal Navy and was second in line after the Victory at the battle of Trafalgar.  Her Captain, Eliab Harvey, had been instructed by Nelson that, "No captain can do very wrong if he places his ship alongside that of an enemy."  On October 21st 1805, Captain Harvey followed these instructions to the letter, engaging for twenty minutes the Santissima Trinidiad--the Spanish Admiral's flagship and the largest ship in the world at that time.  He then rammed The Redoutable, at the time engaged with Nelson's flagship, The Victory.  A boarding party from Temeraire captured The Redoutable--the same ship whose marksman had shot Nelson fatally earlier that day.  Thus Temeraire helped to avenge Nelson's death and to win victory at Trafalgar.

The Temeraire later served with further distinction in the Baltic and the Mediterranean.  She was for a time a recruiting ship.  Still later, she was put to other uses.  Here is what Sam Willis, author of The Fighting Temeraire, has to say...

"While the Royal Navy no longer wanted ships like the Temeraire for active duty, however, with the British still committed to fighting both the French and Americans; there was an unrelenting demand for prisoner accommodation.  Between 1803 and 1814, 122,440 French prisoner were brought to Britain, an astonishing figure in itself, but one that makes no allowance for the Italians, Swiss, Poles, Saxons, Spaniards, Dutchmen and, of course Americans who were also held as prisoners of war in Britain.  In fact it has been estimated that, during the war of 1812, fourteen per cent of all American naval and private seamen were held as prisoners of war in Britain, perhaps ten thousand in all.  The accommodation problem was therefore acute...In particular, in autumn 1813, more hulks were needed at Plymouth.  In October, the superintendent of the hulks there had complained that his prison ships were all being filled owing to the success of the war in Spain and Admiral Sir Robert Calder's requirement that between three and four hundred places were to be kept available at a moment's notice.  In December 1813, therefore, the Temeraire was fitted as a prison ship to serve in Plymouth."*

The principle of NIMBY (Not In My Back Yard) was clearly operational in Britain during the Napoleonic era.  The  English did not want to have thousands of prisoners of war filling their own prisons or local neighborhoods.  Their solution was to use older ships like the Temeraire as prison hulks and anchor them offshore.  They were, in fact, a floating Guantanamo Bay, anchored just off the shores of Britain.

Here are the ultimate questions in regard to Turner's fabulous Fighting Temeraire.

1) Would it possible to imagine a future American artist creating a sympathetic (irony-free) representation of an American piece of military hardware that is used in the war on terror?

2) If so, would it be possible for this work, let us call it, Drone over Sunset at Guantanamo, to become the most popular painting in the USA?

Until that day comes, we can celebrate Turner's masterpiece.

* The Fighting Temeraire: the Battle of Traflagar and the Ship that Inspired J.M.W.Turner's Most Beloved Painting.  Sam Willis. Penguin Books. 2010. 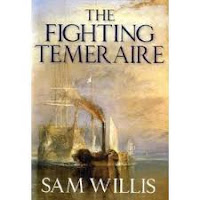