In Mark Kurlansky's wonderful book, The Big Oyster: History on the Half Shell (www.amzn.com/0345476395) we learn about the bivalve bounty that once existed off the shores of Manhattan.  Kurlansnky writes, "By 1880, New York was the undisputed capital of history's greatest oyster boom in its golden age, which lasted until at least 1910.  The oyster beds of the New York area were producing 700 million oysters a year."

The first blow to oyster production was sewage.  "The reality is that millions of people produce far too much sewage to co-exist with millions of oysters...A million times worse than pollution happened.  The silt and sludge alone would have been enough to kill oysters, which would sink in it and suffocate.  But the industrial wastes consisted of heavy metals, including seven thousand pounds of zinc, copper, lead chromium, and nickel that entered the city sewer system every day...Between the 1940's and the 1970's, General Electric dumped hundreds of thousand of pounds of polycholorinated biphenyls, PCBs, into the Hudson..Concentrations of six heavy metals were found in the 1980's in the central muddy portion of the bay (Raritan).  They had entered the water from the many factories built on the Raritan Rover during World War II.  With the sentiment "anything for the war effort," these industries were allowed to freely dump into the river, and the practice continued after the war.  In 1978, Raritan Bay was found to have the highest concentration of hydrocarbons.  Fish in the bay were found to be laced with PCBs.  The fish were often misshapen by a pollution-caused disease known as "fin-erosion disease."  The Big Oyster, Mark Kurlansky, 2006 (www.amzn.com/0345476395).

World War II was the most destructive war in the history of mankind claiming the lives of around 60 to 70 million casualties worldwide; another casualty was the oyster beds of New York.  America's Military Industrial Complex may have knocked off Hitler and Tojo, liberated the Nazi and Japanese concentration camps, but it also has the death of billions of oysters on its hands as well.  In order to construct Freedom's Forge and win World War II the tasty bivalves of New York had to walk the plank.

Today, Seattle is a great place to explore the still-beating heart of the Military Industrial Complex (MIC) that grew out of World War II. You can take in The Museum of Flight (see earlier post, Museum of Flight, 7/9/12), near Boeing Field, and Paul Allen's Flying Heritage Collection (see earlier post, Flying Heritage Collection, 6/29/12) up in nearby Everett.

Seattle and the Northwest is also, happily, a terrific place for oysters.  The pristine waters of the Puget Sound are a fabulous breeding round for the delicious bivalves.  A fantastic new restaurant called Walrus and the Carpenter (http://thewalrusbar.com/) recently opened in Ballard,WA.    The Walrus and the Carpenter is located on Ballard Avenue in an mixed use neighborhood that has manufacturing along with several restaurants and bars.  The restaurant is located just above a bike shop.  They have a great selection of local oysters, fresh baked bread, seasonal salads which can all be washed down with champagne, draft micro brews and a good selection of wines.  Their menu also features provocatively named cocktails such as Moustache Ride and Death in the Evening.  Beyond oysters the menu changes on a daily basis to provide for the freshest possible options.  They featured French classics such as escargot and steak tartare on my recent visit.  The tomato salad with organic tomatoes was amazing.  They do not take reservations, so go early when it opens at 4:00 pm to avoid disappointment!

The restaurant is, of course, named after the eponymous poem by Lewis Carrol.


The Walrus and the Carpenter


The sun was shining on the sea,
Shining with all his might:
He did his very best to make
The billows smooth and bright--
And this was odd, because it was
The middle of the night.

The moon was shining sulkily,
Because she thought the sun
Had got no business to be there
After the day was done--
"It's very rude of him," she said,
"To come and spoil the fun!"

The sea was wet as wet could be,
The sands were dry as dry.
You could not see a cloud, because
No cloud was in the sky:
No birds were flying overhead--
There were no birds to fly.

The Walrus and the Carpenter
Were walking close at hand;
They wept like anything to see
Such quantities of sand:
"If this were only cleared away,"
They said, "it would be grand!"

"If seven maids with seven mops
Swept it for half a year.
Do you suppose," the Walrus said,
"That they could get it clear?"
"I doubt it," said the Carpenter,
And shed a bitter tear.


"O Oysters, come and walk with us!"
The Walrus did beseech.
"A pleasant walk, a pleasant talk,
Along the briny beach:
We cannot do with more than four,
To give a hand to each."

But four young Oysters hurried up,
All eager for the treat:
Their coats were brushed, their faces washed,
Their shoes were clean and neat—
And this was odd, because, you know, 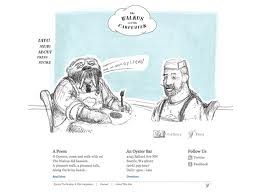 They hadn't any feet.

Four other Oysters followed them,
And yet another four;
And thick and fast they came at last,
And more, and more, and more—
All hopping through the frothy waves,
And scrambling to the shore.

The Walrus and the Carpenter
Walked on a mile or so,
And then they rested on a rock
Conveniently low:
And all the little Oysters stood
And waited in a row.

"The time has come," the Walrus said,
"To talk of many things:
Of shoes- and ships- and sealing wax-
Of cabbages- and kings—
And why the sea is boiling hot-
And whether pigs have wings."

"But wait a bit," the Oysters cried,
"Before we have our chat;
For some of us are out of breath,
And all of us are fat!"
"No hurry!" said the Carpenter.
They thanked him much for that.

"A loaf of bread," the Walrus said,
"Is what we chiefly need:
Pepper and vinegar besides
Are very good indeed—
Now if you're ready, Oysters dear,
We can begin to feed."

"But not on us!" the Oysters cried, 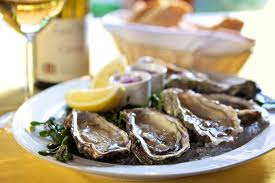 Turning a little blue.
"After such kindness, that would be
A dismal thing to do!"
"The night is fine," the Walrus said.
"Do you admire the view?"

"It was so kind of you to come!
And you are very nice!"
The Carpenter said nothing but
"Cut us another slice:
I wish you were not quite so deaf—
I've had to ask you twice!"

"It seems a shame," the Walrus said,
"To play them such a trick,
After we've brought them out so far,
And made them trot so quick!"
The Carpenter said nothing but
"The butter's spread too thick!"


"I weep for you," the Walrus said:
"I deeply sympathize."
With sobs and tears he sorted out
Those of the largest size,
Holding his pocket-handkerchiefs
Before his streaming eyes.

"O Oysters," said the Carpenter,
"You've had a pleasant run!
Shall we be trotting home again?"
But answer came there none—
And this was scarcely odd, because
They'd eaten every one.

Commander Kelly says, "Eat Your Oysters and check out the Walrus and the Carpenter in Ballard"!

Special thanks to Randa Minkarah for pointing out the Walrus and the Carpenter to me!
Posted by Commander Kelly at 7:50 PM