On July 19, 1545 the Mary Rose, pride of Henry VIII's fleet, sank in the waters near Portsmouth.  The King himself witnessed the catastrophe unfold from the shore.  Only about 30 out of the crew of around 500 were saved.  The exact cause of the tragedy remains somewhat mysterious.  According to one survivor's record, the Mary Rose, opposing a hostile French fleet, had fired her guns from one side and was turning to fire again when she dipped her open gun ports below the water and sank immediately.  Other accounts suggest that French gunfire may have been responsible.

What is certain is that she settled to the bottom that afternoon and about half the ship was eventually covered with silt for over 400 years.  It was this silt that preserved half the ship's timbers from destruction.  An extraordinary archaeological project spanning many years located the ship in 1971 and recovered many items.  In 1982 half of the ship was brought to the surface for the fist time since its sinking in 1545.  Prince Charles himself dove to the Mary Rose shipwreck and watched when she was resurfaced on October 11, 1982.

From 1994 the ship has been spared with a water-soluble wax to strengthen the wooden hull.  Now the ships's timbers are being dried in a temperature controlled environment until 2017.

The Mary Rose served for 34 years as a warship in the Tudor Royal Navy.  She fought in two naval engagements: Brest in 1512 and the Battle of Solent in 1545.  She carried over 70 bronze guns that fired iron and hand-carved stone cannonballs.  She also had a complement of archers who fired their longbows from the Castle deck.

The new Mary Rose Museum (http://www.maryrose.org/) in Portsmouth opened in the May of 2013 and has now become one of the premiere tourist destinations in England.  Three floors offer visitors a comprehensive view of the ship.  Over 19,000 objects that were found from the ship are on display in the Museum.  There were, for example, 137 longbows and 3,500 wooden arrows. A visitor can gain a appreciation for many of the realities of everyday life in the Tudor period.

Even the skeleton of "Hatch" the dog is on display.  You can purchase "Mary Rose" beer in the Museum gift shop! 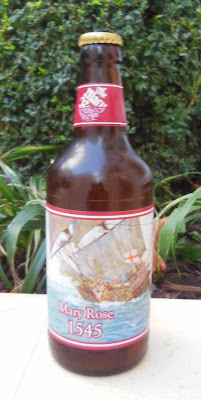 Britain is an island nation with a proud maritime and naval tradition.  The Royal Navy is the "Senior Service" in the British military.  The Mary Rose has thankfully been preserved so that future generations will be able to explore this rich history.

Posted by Commander Kelly at 11:02 AM