Fifty-two years ago today (July 2, 1961) Ernest Hemingway blew his head off with a shotgun at age sixty-one.  He apparently used his favorite pigeon gun made by W.C. Scott & Son to write his final chapter http://gardenandgun.com/article/hemingways-suicide-gun.

Terry Mort, a former US Navy officer, recently wrote a book called The Hemingway Patrols: Ernest Hemingway and His Hunt for U-boats (2009, www.amzn.com/1416597875) .

Hemingway was born in Oak Park Illinois in 1899.  One of the greatest American writers of the 20th century was a high school graduate who never attended college.  He became a reporter for the Kansas City Star and went to Europe.  He was wounded by shrapnel while serving as a Red Cross stretcher bearer on the Italian front in the first World War.  During his halcyon days he lived in Paris in the 1920s with friends such as F. Scott Fitzgerald and Gertrude Stein -- memorably recollected in his posthumous memoir A Moveable Feast.  He married four different women.  Hemingway was the author of several classic American novels such as Farewell to Arms, The Sun also Rises and The Old Man and the Sea.  He was awarded the Nobel prize for literature in 1954.

By all accounts, Hemingway was a prodigious drinker.  He is reputed to have set the house record, drinking 16 Papa Dobles at the "Floridita" bar in Havana one night.  On arriving at the Ritz bar on August 25, 1944 for the liberation of Paris he is said to have asked, "How about seventy-three dry martinis?"  (See earlier post http://americanconservativeinlondon.blogspot.com/2012/10/hemingway-liberates-ritz-bar-in-paris.html)

Having survived a car wreck, two World Wars, two airplane crashes in Africa and four marriages he was a physical and emotional wreck at the end of his life.  He self-medicated throughout his life with alcohol.  Electric shock therapy administered at the Mayo clinic wiped much of his memory banks clean -- the ultimate catastrophe for a writer of fiction.

My father, Robert Kelly, recalled meeting him at a bar in Ketchum near the end of Hemingway's life.  Hemingway, holding court from his bar stool, was drunk, rambling and mostly incoherent.

Many years before, Hemingway was living in Cuba when World War II broke out.  Ever the man of action, he was not content to view the conflict from a safe distance.  He was passionately anti-fascist on account of his experiences in the Spanish civil war.  When the US Government began recruiting irregulars to aid in the anti-submarine war effort Hemingway answered the call.  The FBI, who kept a dossier on him, was suspicious of his left wing connections from the Spanish civil war.

Hemingway, however, was notoriously apolitical.  In his short story "Night Before Battle," he wrote "I guess he's nuts all right.  Or has he got politics?"  "He's got politics."  Mort writes, "A person 'had' politics.  Like a disease.  Right or left.  Both equally fatal.  To someone else and perhaps to yourself.  Fascism and communism were the twin malignancies of the twentieth century.  And both metastasized in Spain."

At the time of the Hemingway Patrols (1942 to 1943) he was married to his third wife Martha Gellhorn who he had met in 1936.  Together they went three times to Spain covering its bloody civil war in 1937 and 1938.  She was a journalist, writer and war correspondent. Hemingway introduced her to the sport of pigeon shooting at which she excelled.  My mother, Nina Van Rensselaer, recalls meeting Martha Gellhorn in a hotel in Mexico who she remembers as being loud, obnoxious and foul-mouthed.

Hemingway loved the expat life in Cuba.  He loved attending pigeon shoots which combined "festive lunches with plenty of alcohol, killing inedible birds and gambling."  Most of all, Hemingway loved nothing more than going out fishing on his wooden boat Pilar.

German U-boats were active in the Caribbean waters at this time.  During the Kriegsmarine's so-called "Happy Days," many merchant men were sent to the bottom by German torpedoes and gunfire (see earlier post, http://americanconservativeinlondon.blogspot.com/2012/08/ss-jeremiah-obrien.html).  Nazi submarines also landed spies and saboteurs on American shores.

Hemingway bonded with his three sons by taking them out on patrol in the Pilar.  The wooden boat, armed only with Thompson submachine guns (see photo above) and grenades, would have been no match for a German U-boat.  His plan of attack was to lure a U-boat to the surface and get close enough to lob hand grenades into the conning tower.  Many U-boats did board fishing vessels during the war to provide fresh fish for their crews and gather shipping intelligence.

Recalling this adventure with his sons Hemingway wrote, "I've been very happy with women.  Desperately happy.  Unbearably happy.  So happy that I could not believe it; that it was like being drunk or crazy.  But never as happy as with my children when we were all happy together."

Some may find Mort's book somewhat anticlimactic in the sense that Hemingway never really had a direct encounter with a German U-boat.  He may have spotted one refueling from a distance but she quickly submerged and disappeared.  The reading public, however, was fortunate that Hemingway did not meet a submarine which would likely have meant his death.

Nor does Mort's book tackle the allegations that Hemingway (KGB codename: "Argo") had a flirtation at this time with Soviet intelligence (http://www.guardian.co.uk/books/2009/jul/09/hemingway-failed-kgb-spy).  I suppose that one is capable of doing almost anything after 16 Papa Dobles!

Martha Gellhorn, a far from impartial observer, tended to view Hemingway's patrols as an excuse to drink excessively with his cronies and avoid the hard task of writing.   Terry Mort sees them in a rather different light.

Mort concludes, "The patrols were representative of the man and his many facets.  They were wartime forays against an enemy, literally an attempt by a wooden boat to take on an iron-and-steel machine of war.  Ironically, for such a steadfastly apolitical man, this separate war had a political dimension.  he went out to confront the weapon of a malignant totalitarian system whose ravages he had witnessed firsthand in Spain; his patrols were an affirmation of his own brand of individualism, his belief in liberty.  If you believe in these things, you have no choice but to assert them in order to preserve them. Too many forces are ready to step up and take them away if you do not.  And as a purely political matter, his country was at war, and although he did not love war, he knew that once you were in one, you must win it."

While in Havana, Hemingway enjoyed drinking Papa Doble Daiquiris at the La Florida bar.  They "had no taste of alcohol," he wrote, "and felt, as you drank them, the way downhill glacier skiing feels running through powder snow."  (http://online.wsj.com/article/SB121157680904218301.html).  Hemingway himself described a properly made Papa Doble as looking "like the sea where the wave falls away from the bow of a ship when she is doing thirty knots."

Here is the recipe to make your own tart and refreshing Papa Doble.  Perfect for the dog days of summer!

Blended and served in a goblet. 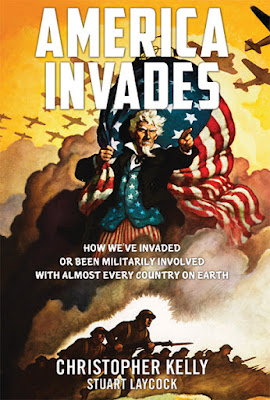 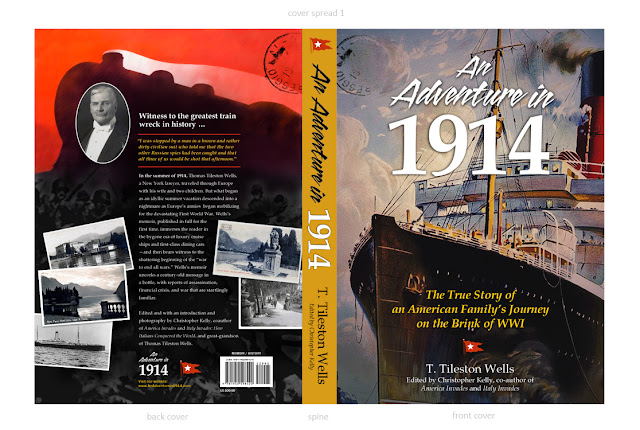 An Adventure in 1914 is now available for
Pre-orders...www.anadventurein1914.com
Posted by Commander Kelly at 5:15 PM

Compelling review. Adding to the Summer reading list. Thanks!

Nice photos and facts and my name is Diogo paulas son