If you happen to vacation in Orlando you may need to take a break from Theme Park overload syndrome.  If visit or live in central Florida and you have any interest in military history, I would highly recommend a soothing hour spent visiting the new Museum of Military History in Kissimmee (www.museumofmilitaryhistory.com).  You won't be sickened by a roller coaster here and admission is just $7.  Moreover, unlike the fantasy world of the theme parks, this museum is grounded in historical reality.

Here you will find displays documenting all branches of the military who have served out country from US civil war to the contemporary conflicts in Iraq and Afghanistan.  The museum just opened last year (2012).  Most of the collection has been donated by veterans.

There is a wide selection of World War II vehicles...

And uniforms as well...

The staff is friendly and helpful.  They will make custom made dog tags for $5 each.  They have  handy research library as well.

You will find a model of the USS Missouri -- "The Mighty Mo"-- an Iowa class battleship launched in 1944.  It was on board this ship that representatives from Imperial Japan and the Allied forces, led by General of the Army Douglas MacArthur, signed the surrender documents to end World War II on September 2, 1945.  Even after two atomic bombs had been dropped on Japan (see earlier post, Truman's Decision to Use Atomic Bombs on Japan, 9/23/12) many US sailors still suspected a trap and were prepared to fire that day on Tokyo's Imperial Palace.  This ship later provided shore bombardment during the Gulf War in 1991.  You can find the ship today in Pearl Harbor near the USS Arizona. 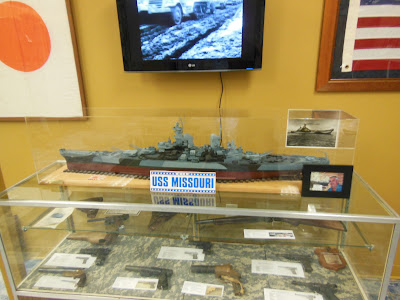 Commander Kellys says, "Thank you veterans for your service.  Go check out the Museum of Military History (www.museumofmilitaryhistory.com) in Kissimmee, FL and tell them the Commander sent you!"

Special thanks to Sergeant Richard McCloud US Army (Ret.) for his kind assistance with the above photographs and dog tags.

Posted by Commander Kelly at 10:00 PM