Errol Flynn was the greatest film action hero of his day.  He played swashbuckling heroes in many films, most of which have been largely forgotten.  In his posthumously published biography, My Wicked, Wicked Ways, (First Cooper Square edition 2003, www.amzn.com/0815412509), he relates the highlights of a life filled with real adventures.  He was born in Tasmania and his father was a distinguished biologist.  He had a troubled relationship with his mother and, subsequently, all the many women in his life.  He was kicked out of every school that he attended.  As a young man he went off to New Guinea to make his fortune.  There he managed a tobacco plantation and even became a slave runner.  He was an accomplished sailor.

Errol married the beautiful French actress Lili Damita.  The couple was not destined for marital felicity.  Arrivng an hour late to an anniversary (of the beginning of their romance, not their wedding) party with about fifty of their friends Flynn was in for a surprise...

"I entered the room after the whole party arrived.  I began to mingle when I suddenly heard someone scream, "Look out, Errol!
Simultaneously there was Lili's voice behind me. "Happy Anniversary, darling."  At the same instant down on my head came a full bottle of Veuve Cliquot champagne.  Consistently French, my wife -- it was a fine vintage.

Dazed and blinded by blood pouring our of my head, I rallied for a moment, then pulled back my fist to swing.  Knowing I had only one punch in me, I swing hard.  Just before blacking out I felt my knuckles connect with a jawbone, breaking a tooth."

After moving out, Errol roomed with David Niven (see earlier post, The Moon is a Balloon, 11/26/12) in a wild bachelor pad in Hollywood.

After the Spanish Civil War broke out Flynn took a break from acting and went to Spain hoping to report on the war.  Flynn writes, "Spain was being used was a testing ground for the weapons to be used later in World War II.  Hitler and Mussolini helped Franco.  Russia helped the Loyalists.  America was playing it neutral.

In the human sense I was for everybody.  Why the hell did brother have to fight brother?  I knew there were idealists, fanatics, nuts on the Loyalist side.  I understood that big money was sentimental to the Franco cause, or outrightly sympathetic.  As to my own sympathies, I decide that since the split was a revolution by Franco against the legally elected Republican government, then I leaned toward the Left.  There might be a little more idealism and humanity on that side."*

The Loyalist side attempted to recruit Errol to their side in the conflict.  Errol relates, "A commissar wondered whether I could do real fighting of the cause.  They gave me a machine gun and said I must go to a certain point and begin shooting...I couldn't do it.  I simply couldn't shoot people down.  Maybe this wasn't my war after all.  I don't want to kill anyone.  Not for political reasons.  I didn't want to fire any guns for uncertain ideas.  I had handled weapons galore in pictures, but there was a vast gap between the make-believe of films and the reality here."  Flynn beat a hasty retreat from Spain.

Later when the Second World War began in September 1939 Flynn's pal, David Niven, joined the British Army and participated in the Normandy campaign.  Flynn, a naturalized US citizen from 1942, attempted to join every branch of the American armed forces but was turned down as 4F; he had an enlarged heart, suffered from TB and was sometimes symptomatic from malaria he had contracted while in New Guinea.

During the war he became embroiled in a messy case of alleged statutory rape that involved two underage girls in Southern California.  Flynn loved to sail.  "My only real happiness is when I am near the sea."  Naked young women would sometimes swim up to his yacht and offer themselves to him.  He did not bother to check their IDs.  William F. Buckley organised a group to support Flynn during the trial that was called the American Boys Club for the Defence of Errol Flynn (ABCDEF).  Flynn was acquitted of the charges though his spirit was largely broken and he was, briefly, suicidal.

The expression "In Like Flynn" means to have achieved a goal, or to have gained access as desired.  Flynn himself explains, "A GI or Marine or sailor went out at night sparking and the next day he reported to his cronies, whom asked how how he made out and the fellow said, with a sly grin, 'I'm in like Flynn.'"

Things went rapidly downhill for Flynn after his acquittal.  He became an alcoholic who would often consume a fifth of vodka each day.  He married twice more and divorced twice.  Late in life he took up with a teenage (underage) girlfriend/actress named Beverly Aadland.  They even wanted to audition for the role of Humbert Humbert and Lolita in the film based on Nabokov's novel!

He supported Fidel Castro at the onset of the Cuban Revolution making a movie called Cuban Rebel Girls with Aadland in the lead. 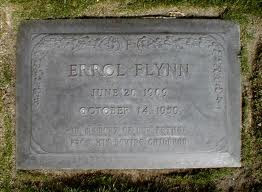 At age 50 he died of a heart attack in Vancouver, Canada where he had gone to attempt to sell or lease his beloved yacht, Zaca.

Errol Flynn was, in some ways, the prototypical Hollywood liberal.  He sympathised with the left during the Spanish Civil War without joining the fight like Orwell and others.  Errol saw himself as a Robin Hood-like figure robbing "big money" studio chieftains like Jack Warner to pay...for his extravagant uninhibited lifestyle.  He supported Fidel Castro during the Cuban revolution.  He lived a hedonistic life and defied conventional morality.  Errol burnt the candle at both ends -- whirling through life like a Tasmanian devil.

He was also a surprisingly decent father.  He was largely truthful in his posthumously published memoir.  Errol Flynn lived life on his own terms.

Errol Flynn was, as Coleridge wrote of Byron, "A wicked lord who, from morbid and restless vanity, pretended to be ten times more wicked than he was."

* For an interesting counterpoint to Flynn's perspective consider the way in which the Spanish Loyalist government foolishly trusted Stalin to keep their gold reserves safe during the civl war...http://www.warhistoryonline.com/featured-article/german-gold-going-home.html?utm_source=rss&utm_medium=rss&utm_campaign=german-gold-going-home


Posted by Commander Kelly at 5:48 AM

Errol Flynn was, in some ways, the prototypical Hollywood liberal." Chris. You do know that I consider myself a "liberal" and as such, I can't let you off with that comment. What does it mean?

He liked to bash "Big Money" (hated his Hollywood bosses), had a Robin Hood complex, sympathized with the left in Spain during the civil war (as do I, by the way) and later Cuba. He identified with many leftist causes while benefiting from the capitalist infrastructure of Hollywood. Sound vaguely familiar...?

Nice post. I imagine most people have never heard the phrase 'in like Flynn'. The first time I heard it used was in a movie - in the 80s probably. Two guys are commenting on another person; first guy says "Man, that guys in". The second guy says derisively "Yeah, in like Flynn". I asked my father about it - he said during the 50's the phrase was commonly used to describe a person with dubious social status. After his rape trial, Flynn continued to show-up at parties and other Hollywood events - he would never be turned away, but he was slightly, untouchable. Apparently, one's character still mattered in those times and, acquitted or not, the public continued to view Flynn as a dirty-old-man. Interestingly, Mike Tyson once invoked the phrase to describe himself. I do not recall the exact event: I believe it was a pre fight press event. He was at a particularly low point in his reputation, but he was still drawing fight's. At one point in the press conference Tyson begins shouting "I'm in like Flynn baby, in like Flynn". Ironically, he was using the phrase entirely correctly - he didn't know it at the time; I doubt he really knew what it meant. I don't believe I've heard the phrase used more than a couple of times since then.

I LOVE Errol Flynn's work. But btw, do your observations make him a "Hollywood Liberal" or a passionate soul looking for purpose?

Is it not possible to be both? He was certainly a passionate soul, he was certainly restless (a seeker), he was a Hollywood icon and he leaned left, insofar as he thought about politics -- probably not too much!

I love all this "fuss" about Flynn. He was an ACTOR! And gave American audiences at that time a great take for the little they paid for admission. He filled our heads and dreams with such swashbuckling and I am envious of the great drinking and sex he had. We should all have lives like he did...just not the terrible endings.

If you need your ex-girlfriend or ex-boyfriend to come crawling back to you on their knees (no matter why you broke up) you need to watch this video
right away...