"Ludwig Wittgenstein, who served in the Austro-Hungarian Army in World War I, ranks among the greatest philosophers of the twentieth century. In his seminal work, Philosophical Investigations, he discussed the ambiguous ways in which we perceive a rabbit-duck image. Austria-Hungary in 1914 may be the ultimate rabbit-duck in history.

Wittgenstein was himself a rabbit-duck—a soldier-philosopher. During World War I, he was decorated for his service as an artillery spotter on the Russian front. He began writing his Tractatus Logico-Philosophicus when he was a soldier, and completed it when he was a prisoner of war. In it, he explores the relationship between language and reality.

Austria-Hungary was a diverse rabbit, a polyglot empire with at least nine major languages. Over 40 percent of the Austrian Tyrol that Wells* visited in 1914 was Italian speaking.


Yet Austria-Hungary was also a unified duck. Franz Joseph had been the emperor of Austria since his accession to the throne in 1848. In fact, the House of Habsburg, which traced its origins back to Charlemagne, had ruled Austria since the fourteenth century. Hungary became part of that empire in 1867. Because Hungary remained autonomous, Austria-Hungary was also known as the Dual
Monarchy. In 1914, the octogenarian emperor was a popular figure, although his life had been scarred by the suicide of his son Rudolph in 1889 and the assassination of his wife by an anarchist in 1898.
In terms of religion, the Austro-Hungarian rabbit was officially Roman Catholic. The Habsburg dynasty was a bulwark of the Holy Roman Empire. But the Austro-Hungarian duck included large populations of Jews, Orthodox Christians, and even Bosnian Muslims.

Austria-Hungary in 1914 was an empire on the brink of collapse. Many competing minorities were barely held together by an inefficient bureaucratic government.

Austria-Hungary in 1914 was in the midst of a golden age. The Dual Monarchy had a population of more than fifty million, and 80 percent of the population was literate. In 1914, Franz Kafka began writing in Prague. Sigmund Freud was revolutionizing psychology in Vienna. The music of Richard Strauss kept Austrians waltzing. Gustav Mahler’s symphonies sent music in new directions, while Gustav Klimt was transforming the art of painting.

Franz Conrad von Hötzendorf, the Chief of the General Staff of the Austro-Hungarian Army and Navy, was the Dual Monarchy’s war hawk. From 1906 to 1914, he advised in favor of wars with Serbia, Montenegro, Russia, Romania, and Italy. He advocated war with Serbia no less than twenty- five times during 1913.

Archduke Franz Ferdinand was the duck to Conrad’s rabbit. The archduke was an advocate for peace and restraint who opposed Conrad at every turn. He told Conrad, “My policy is a policy of peace. Everyone must learn to live with that.” They did for a while. Ferdinand was a reformer who dreamed of creating a “United States of Greater Austria.”

And he might have pulled it off had he not made that fateful visit to Sarajevo in June of 1914." 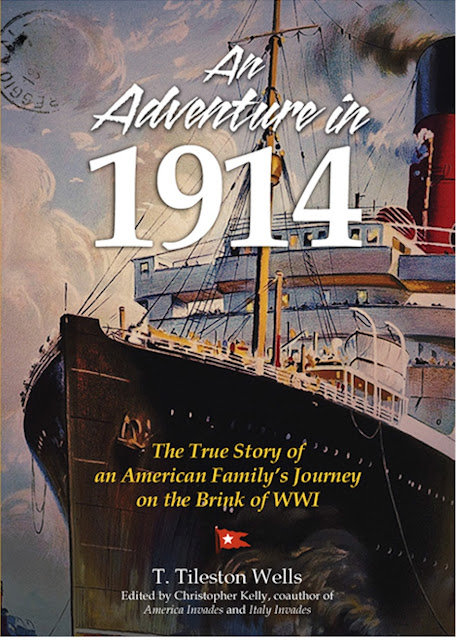 ** In August of 1914 the Austrian authorities in Riva briefly arrested Thomas T. Wells.

Posted by Commander Kelly at 6:02 AM

Merry Christmas,
You are so interesting! I don't believe I've truly read through anything like that before. So wonderful to discover another person with a few unique thoughts on this issue. Seriously.. many thanks for starting this up. This website is something that is required on the internet, someone with a bit of originality! If you want to read Funny Christmas Speech you have to see the link
Thank you,

Wish you a
Celebrate happy valentines day 2019 With Us