I knew Mark best during his high school years.  In many ways, he was a pretty typical  kid of the 1970s.  He enjoyed listening to Pink Floyd and Jethro Tull.  He was a very talented athlete who earned varsity letters for football and baseball.  He also played hockey and took up dramatics.  He was a fierce competitor and a fine teammate.  Mark was sociable and had many friends at Groton.

Mark graduated in the spring on 1977 and went on to Trinity College in Hartford Connecticut.

Groton School was and remains, like most American prep schools, a feeder to Wall Street and the academic left.  Eckel, or “Eck” as we called him, took neither of these well worn paths.

Eck was fashioned more in the antique Roman mold.  Groton’s school is motto is “Cui Servire est Regnare” which the school grandly and rather loosely translates as  “Service is Perfect Freedom”.  Groton expects every man and, since 1977, woman to do their duty serving in some capacity.

For Eck the choice was pretty obvious.  His dad was a US Navy chaplain who had served on Iwo Jima during World War II.  His mom had also served in the Navy and his parents had married in their navy uniforms.  Mark was destined to follow in their navy path.


The timing of his Graduation from Trinity College in 1981 may have helped make Eck’s choice a bit easier.    Ronald Reagan had just been elected the White House the previous fall on a platform that included the promise to rebuild a 600 ship navy.  Defense spending was about to balloon in the Reagan years as Reagan was determined to win “Peace through Strength” in what proved to be the waning days of the Cold War.  Leaders like Eckel were needed to restore the spirit of the US Navy in the post-Vietnam era.

Eck earned his masters from the Naval War College in Newport, Rhode Island.  Eckel rose to the rank of Captain in the US Navy.  After serving more than twenty years in the navy Eck retired but continued to work for defense contractors.   After the 9/11 attacks Eck assumed a new role with Homeland Security in the San Diego area.

Eck’s last battle was with pancreatic cancer.  He leaves behind a young son named Phineas. 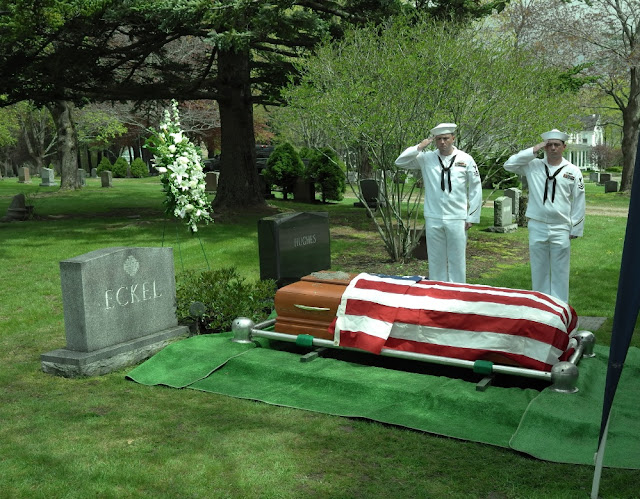 On May 13, 2017 a moving service was held for Eck at the Groton School Chapel that he knew so well.   Two of his classmates officiated and others gave moving tributes and read prayers.  The ceremony concluded with a rousing rendition of the famous Navy Hymn.  Memories of Eck at Groton were recalled fondly at the form’s 40th reunion which took place that weekend.

Eck’s life is over but he was a man of faith who died in hope of the resurrection.  Mark was the real deal.  He leaves behind a shining example of selfless and honorable service.

A beautiful and moving tribute for Mark Eckel, who was at Groton a couple of years after me. I knew Mark but not very well, just well enough however to remember him as a nice guy.
One of the strange aspects of hitting middle age is the loss of people our age, often still in the midst of doing the things so many people do, such as bringing up children. At the same time, we have it a lot better than our parents' generation, thanks to medical advances.
I'm glad for Mark that he had good friends like Christopher Kelly and Christopher Loring, who have given him lovely tributes. RIP Mark.