Surprisingly, Italian invasions of Cuba from Christopher Columbus to "Lucky" Luciano have been as consequential as American invasions of the Caribbean island.  Here is the complete Cuba chapter of Italy Invades: How Italians Conquered the World...

"Cuba is by far the largest island in the Caribbean. So perhaps it should come as no surprise that when Columbus, hoping to find his way to the riches of Asia, approached its coastline on October 24, 1492, he mistook it for a continent.  He named the island Isla Juana, after the Spanish prince of Asturias.  Columbus seemed to be enchanted by Cuba, pronouncing it the “sweetest and fairest” of lands. He was, however, disappointed not to discover gold on the island and soon moved on to Hispaniola (see Haiti and Dominican Republic).
 
In addition to Columbus, other Italians played a significant role in establishing and maintaining Spanish rule in Cuba. For example, Italian military engineer Battista Antonelli designed the spectacular El Morro fortress for Havana.

In 1605, Mantua, Cuba, was founded by shipwrecked Italian sailors.

Cuba was under Spanish rule for many centuries. The Spanish- American War of 1898 ended that. An Italian American from New York State, Frank O. Fournia, won the Medal of Honor for rescuing wounded soldiers while serving in the US Army in Cuba during this war.


Cuba became a major sugar producer in the early twentieth century. It is the mere addition of sugar that distinguishes an authentic café cubano from a traditional Italian espresso. This popular drink might even be classified as a sweet Cuban invasion of Italy!

Cuba and Italy both eventually joined the Allied cause in World War I.

Immediately after Pearl Harbor, Cuba joined the Allies and declared war on fascist Italy. Some Italian Cubans were arrested and imprisoned during the war. A small but efficient Cuban Navy patrolled the waters off Cuba, hunting German and Italian submarines. Italian submarines such as the Leonardo da Vinci and the Enrico Tazzoli retraced the path of Columbus, hunting for merchant ships in the waters off Cuba. Even Ernest Hemingway, who had served in Italy in World War I, took his fishing boat Pilar out hunting for Axis submarines.
The famous mobster "Lucky" Luciano was born in Sicily in 1897. During World War II, while a prisoner at Sing Sing, he provided intelligence information on his native land to the US Navy prior to the July 1943 invasion of Sicily. His sentence was commuted by the governor of New York in 1946 on the condition that he would be deported to Italy. He was, but in October of 1946, he moved to Cuba, where he helped to organize a mob takeover of the island nation. Luciano and Meyer Lanksy sealed a deal with the Batista regime one night in 1946 at the Hotel Nacional. Frank Sinatra provided the entertainment. Havana would be transformed into a Caribbean Las Vegas.

An Italian-born entrepreneur, Amadeo Barletta, was the publisher of El Mundo, one of the largest Cuban newspapers in the 1950s.

Fidel Castro led the Cuban Revolution that would sweep Batista and the Mafia from power in Cuba. Later, the CIA hired the Mafia to assassinate Castro, but with no success.

In 1961, Italian-built 105mm howitzers were used at the Bay of Pigs by Castro’s forces against the American-supported invaders.

A visitor to Havana today might stumble upon the Napoleon Museum, which houses one of the finest collections of Napoleonic memorabilia in the world. This museum, dedicated to the former King of Italy and founded in 1961, was once the home of Orestes Ferrara, an Italian Cuban who had been ambassador to the United States." 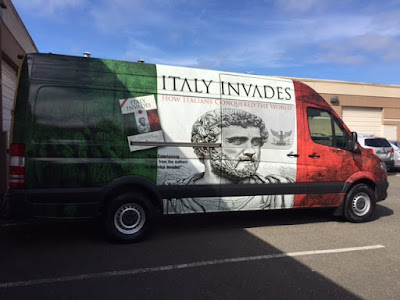 You can purchase signed copies of Italy Invades: How Italians Conquered the World here...www.italyinvades.com

Posted by Commander Kelly at 8:40 AM