Americans did not win their independence from Britain without the assistance of foreign intervention.  The French sent an Army and a navy.  The Marquis de Lafayette became and aide de camp to General Washington.  The Dutch provided critical financial support.  The Spanish launched the siege of Pensacola and also provided financial aid to the Patriot forces.

We open the Germany chapter of America Invades as follows...

"The first military interaction between the United States and Germans saw Germans in action on our soil. The British, in fact, used Hessian troops to help fight the colonists in the American Revolution while a certain “Baron” von Steuben from Magdeburg Prussia became a major general in the Continental Army and wrote the drill book (Revolutionary War Drill Manual) that was used by the US Army until the War of 1812."

Baron von Steuben (who may not really have been a "Baron") drilled the troops while at Valley Forge during the winter of 1777-78.  This paid off in June of 1778 when the American troops defeated the British at the Battle of Monmouth in New Jersey.

We Americans owe an enormous historic debt to many foreign individual and nations that chose to intervene on our behalf to fight the superpower of the 18th century.

I enjoyed my recent visit to Valley Forge, PA where history comes to life (http://www.nps.gov/vafo/index.htm). 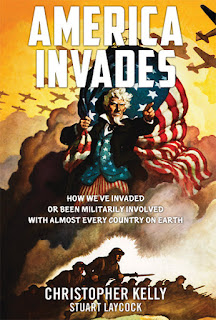 Posted by Commander Kelly at 4:45 AM