In these days of hyper-partisanship where "true believers" of all stripes seem to be intent upon annoying the rest of us, it is well to recall the lesson of Winston Churchill's extraordinary life.  We Americans, Democrats and Republicans alike, need to be reminded that greatness can spring, not always from a log cabin, but even from a palace (http://americanconservativeinlondon.blogspot.co.uk/2012/06/blenheim-palace.html).

Winston Churchill was not a religious man in the conventional sense of the term.  After attending a rare service near his home at Chartwell the local rector remonstrated, "Well, Prime Minister, you are not quite a pillar of the church, are you?”

“No,” replied Churchill, “I’m not a pillar.  I’m a buttress.  I support the church from the outside."

Nor was his loyalty to political parties unquestioning, unwavering or conventional; quite the contrary, he changed party affiliation twice moving from Conservative (Tory) to Liberal and later back again.   Churchill straddled a lifelong ideological divide; he was a Conservative by instinct intent upon preserving Britain's Imperial glory who was also a zealous reformer believing that government policy could effect positive change in the lives of its citizens.  His wartime government was a cabinet of ALL major British parties.  Clement Atlee of the opposition Labour party served as the Deputy Prime minister in Churchill's government during the war.

The thesis of late Victorian Imperialism and the antithesis of the Edwardian Liberal Reform movement received a Churchillian synthesis: The British Empire with it rule of law and free trade represented the best interests of humanity, or at least the one quarter of humanity that resided within the pink bits of the world map.

An early advocate of free trade, Winston fell out with the protectionist Joseph Chamberlain who had been an early Conservative patron of his.  Joseph Chamberlain was the father of Neville of appeasement fame.  Churchill crossed over to the other side of parliament to stand beside Lloyd George, leader of the Liberal party.

Nevertheless, Churchill was not a man lacking faith or conviction. Churchill's faith was four-fold.  The first pillar of Churchill's faith was an unshakable patriotic devotion to King and Country.  He had, after all, risked his life as a cavalryman at the battle of Omdurman where he slew the enemies of Queen Victoria with a German Mauser.  A visitor to London can see this gun at the Churchill War Rooms http://americanconservativeinlondon.blogspot.co.uk/2012/02/churchill-war-rooms.html). The adventures of his youth are best told in his own classic autobiography, My Early Days (www.amzn.com/0684823454).  Churchill's story is ably continued by Michael Shelden's Young Titan: The Making of Winston Churchill, published in 2013  (www.amzn.com/1451609914).  Young Titan takes Churchill from his return from the Boer war to the conclusion of the Great War.

The second pillar of Winston's faith was his steadfast devotion to the cause of democracy.  Churchill famously said that "It has been said that democracy is the worst form of government except all the others that have been tried".

In May of 1941 the Luftwaffe was raiding London on a nightly basis.  One spring night fires broke out at Westminster Abbey and shrapnel struck the tower of Big Ben.  Shelden writes, "Soon flames were sweeping through the debating chamber of the House of Commons.  Its roof fell away, the galleries collapsed, and ashore if twisted steel and masonry buried the rows of green leather benches where so many famous debates had raged over the decades.  Only the scorched walls were left standing."  Churchill lamented, "Our old House of Commons has been blown to smithereens."

Churchill paid a visit to the devastated site that had been the home to the oldest parliamentary democracy in the world.  "Now, as he surveyed the damage of that fiery Saturday night, tears began to trickle down his cheeks, and then to slow.  'He did not try to stop them,' noted a reported standing nearby, or even wipe them away.'  Motionless in the sunlight -- one hand in his overcoat, his feet planted firmly on amount of rubble -- he looked for a second like a statue that had miraculously survived the bombing."

Churchill, true to his bedrock Conservative instincts, insisted that, "The Chamber must be rebuilt -- just as it was."  And so it was.  Source: Young Titan: The Making of Winston Churchill, Michael Shelden, 2013 (www.amzn.com/1451609914)

The third pillar of his faith, tested by many setbacks and reversals over his long life, was his belief in himself and his destiny.  Born in a grand palace, he confided that, "the stars in the courses guided my progress."  Churchill also said, "We are all worms. But I do believe I am a glow-worm."

Shelden's book does not focus on the well-known Churchill of the World War II, but rather his early formative years in politics from 1900 to 1918.

For much of this time Winston was a bachelor.  The young Churchill was comically unlucky in love, falling in love with and being rejected by a series of beautiful and prominent women: Pamela Plowden who became Lady Lytton, the American actress Ethel Barrymore and a Prime Minister's daughter Violet Asquith.

Churchill's bad luck with the ladies was political as well as personal.  In spite of the fact that he was supportive of voting rights for women, the suffragettes attacked him repeatedly.  They heckled his speeches and rang cow bells in the middle of his meeting interrupting his flow of thought.  When he lost a by-election in 1904, Emmeline Pankhurst claimed that, "It was the Suffragettes who defeated Mr. Churchill."

Finally, he had the good fortune to meet, propose to and be accepted by Clementine Hozier. You can find the spot in Blenheim palace gardens in front of the Temple of Diana where he popped the question to Clemmie  http://americanconservativeinlondon.blogspot.co.uk/2013/09/clementine-churchill.html.  It was no coincidence that their first daughter was named Diana.  The fourth pillar of Winton Churchill's faith was undoubtedly his marriage in 1908 to Clementine.

Churchill was a rising star in the British government.  He was first elected to Parliament at age 26.  He was the youngest man to join the British Cabinet in fifty years.  He rose to become a reforming Home secretary and to preside as First Lord of the Admiralty over the most powerful navy on earth.  Long before the start of  World War I he foresaw the devastation that threatened to shake the roots of European civilization: "A European war can only end in the ruin of the vanquished and the scarcely less fatal commercial dislocation and exhaustion of the conquerors...The wars of peoples will be more terrible than those of kings."  Source: Young Titan: The Making of Winston Churchill, Michael Shelden, 2013 (www.amzn.com/1451609914)

Many predicted that this young man would rise to become Prime Minister.  Instead the First World War very nearly crushed him.  In order to avoid the horrors of static trench war along the Western front Churchill sought to make a strategic flanking move attacking the weakest ally of the Central powers, the Ottoman empire, near the Dardanelles.  The Gallipoli campaign would prove to be a fiasco costing thousand of Allied lives and several ships.  Churchill assumed the guilt for the operation on his broad shoulders and was expelled from the cabinet.  Disgraced, he joined the British Army fighting in the trenches as a lieutenant colonel  in the Royal Scots Fusiliers.  He showed remarkable physical courage venturing into no man's land no less than 36 times.

Imagine if Donald Rumsfeld, after resigning as Secretary of Defence, had served as an active duty Army colonel in Fallujah!

Churchill, written off by many, would storm back to later become Prime Minister in Britain's hour of greatest need.  The privileged scion of an aristocratic brood had been polished by adversity into a man of rare eloquence and judgement. He is now widely regarded as the greatest Britain of all time.

Commander Kelly says, "Shelden's Young Titan would make an excellent Christmas gift for anyone who with an interest in politics or history." 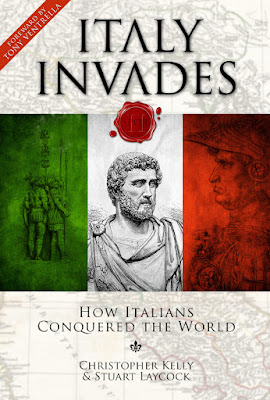 You can purchase your copy of Italy Invades: How Italians Conquered the World here...www.italyinvades.com
or on Amazon...www.amzn.com/1940598729

Posted by Commander Kelly at 1:55 AM

Thanks very much, Chris. The review is great, and I really appreciate it. I'm
especially grateful for the Christmas gift suggestion!