One may not expect to find Winston Churchill in Texas, but then the world is full of surprises.

President Obama famously removed the bust of Churchill gifted to America by the British people (http://www.telegraph.co.uk/news/worldnews/barackobama/4623148/Barack-Obama-sends-bust-of-Winston-Churchill-on-its-way-back-to-Britain.html).
Churchill has, however, been restored to the Oval office -- at least in the recently opened George W. Bush library on the campus of SMU (http://www.georgewbushlibrary.smu.edu/).  Here you will find a bust of the most popular Briton of all time.

The Dallas Museum of Art is an even more surprising place to find Churchilliana.

Churchill said, "History shall be kind to me, for I intend to write it." He wrote extensively in his lifetime as a journalist and a historian.  He wrote multi-volume histories of the First and Second World Wars and a History of the English Speaking Peoples. Winston Churchill won the Nobel prize for literature.

His publisher was Emery Reves, a wealthy Hungarian entrepreneur and art collector.  Reves married a beautiful model from Marshall, Texas - Wendy Reves.  This couple entertained Churchill at Villa La Pausa in the south of France.  This villa was originally built by Coco Chanel in the 1920's and purchased by Reves in 1953.  You can buy the Villa La Pausa today for around 40 million Euros (http://tmagazine.blogs.nytimes.com/2013/06/07/letter-from-paris-the-house-that-coco-built/?_r=0)!

Emery Reves died in 1981 and his widow Wendy in 2007.  The couple gifted the contents of their villa to the Dallas Museum of Art (www.dallasmuseumofart.org).  The Wendy and Emery Reves Collection includes important works of art by Manet, Cezanne, Renoir and van Gogh.

At a dinner party held at the Villa La Pausa guests were asked to draw a quick self-portrait.  This was Churchill's amusing response...

That tail looks like it could open up a wine bottle if necessary!

Churchill was a great wartime leader who loved painting and the joys of peace.  He wrote, "Happy are the painters, for they shall not be lonely.  Light and color, peace and hope, will keep them company to the end or almost to the end of the day."  (Source: Churchill, Celia Sandys, 2005 www.amzn.com/1843570491). 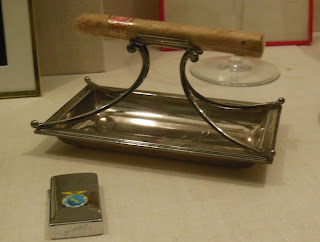 He once said, "I am a man of simple tastes, easily satisfied by the best."  His favorite cigars were Romeo y Julieta from Havana.

Commandefr Kelly says, "Churchill will soon be back on the fiver (http://americanconservativeinlondon.blogspot.com/2013/07/churchill-on-fiver.html) and you can find his spirit today deep in the heart of Texas!"

There is a Winston Churchill High School in San Antonio, Texas that has an outstanding athletic record.

Special thanks to my friend Bob Guinn for bringing the Wendy and Emory Reves Collection to my attention.

Arnold Leon Schroeder, Jr., son of the late Wendy Russell Reves, filed a lawsuit against Kern Wildenthal of UT Southwestern, Edward A. Copley of Akin Gump Strauss Hauer and Feld, L.L.P., Harry S. Parker, III, George Charlton, Irvin Levy, and the Dallas Museum of Art, alleging conspiracy and fraud to wrongfully steer hundreds of millions of dollars in assets away from Wendy during her life and after her death - click here to read the lawsuit https://goo.gl/aNoKmd

Vaporfi is the best electronic cigarettes provider on the market.