The Roots of Obamacare

"The belief that the king's touch could cure the skin disease of scrofula emerged at some point in the twelfth century, although Edward the Confessor was accredited with miraculous powers at an earlier date.  It is possible that Henry II was the first king to make a ritual out of healing those afflicted by the disease, and one of his courtiers wrote that the 'royal unction' was manifest 'by the diminution of groin disease and the cure of scrofula'.  The tradition continued until at least 1712, when Queen Anne touched the three-year old Samuel Johnson (see earlier post, Cats, Oysters and Dr.Johnson, 1/23/13) for the latter disease.  Johnson remained a staunch royalist for the rest of his life."

Does the superstitious belief in the healing power of kings not lie at the very root of the NHS system in Britain today and, furthermore, in the touching faith in Obamacare that is shared by so many on the left?  It is but a short step from faith in the divine right of kings to belief in the therapeutic powers of the nanny state as exemplified by the NHS or the belief that Obamacare will lower health care costs.  "The king loves his people and will provide 'free' health care for all" is the atavistic basis for Britain's NHS and Obamacare. 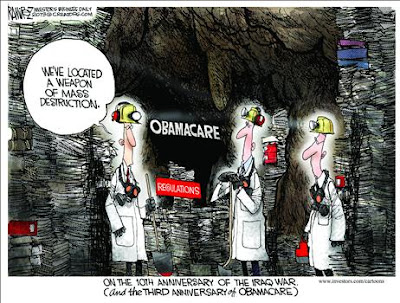 Posted by Commander Kelly at 4:21 AM