Why did the Romans invade Britain?

The historian Peter Ackroyd has written,  "It was said that Caesar had invaded England so that he could get his hands on some excellent oysters."  Source: The History of England, Volume I: Foundation, 2011 (www.amzn.com/125000361X).

"When Julius Caesar invaded Britain in the middle of the first century B.C., it was suspected that he had in mind access to freshwater pearls. Unlikely as this might seem to us, Suetonius (Life of Caesar 47) reports : "They say that he was led to invade Britain by the hope of getting pearls, and that in comparing their size he sometimes weighed them with his own hand; that he was always a most enthusiastic collector of gems....".  (http://community.middlebury.edu/~harris/lat.inscription.html).

There you have it; no oysters, no Londinium.  Without the oyster beds of Colchester, England might have remained as uncivilized as the wilds of Teutonic Germany, the Pictish highlands of Scotland or the bogs of ancient Ireland.   Without oysters there would be few roads, few English cities, no Romano-British civilization and no King Arthur to lead it.  No oysters would have meant no Camelot, no Monty Python and the Holy Grail (www.amzn.com/B0016492BW), no Spamalot!


The Romans were also master enologists who brought their wine-making skills to the shores of Britian.  One can, however, be forgiven for saying that in Roman Britain "The Pearls came before the wine!"

Commander Kelly says, "All hail the civilizing oyster!  Let there be oysters under the sea (see song below)!"

Sweetings in the City of London only for weekday lunch: http://www.sweetingsrestaurant.com/

The Cow pub and restaurant in Notting Hill: http://www.thecowlondon.co.uk/location.html

For the best fresh oysters in Seattle, check out my favorite...http://thewalrusbar.com/

"Let there be oysters under the sea!"

Pre-order your copy of
Italy Invades: How Italians Conquered the World here...
http://store.americainvades.com/products/italy-invades-preorder 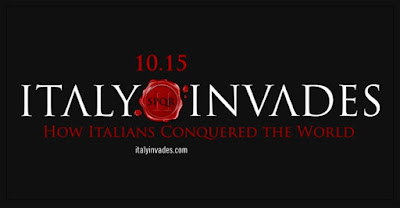 Posted by Commander Kelly at 10:11 AM