Copenhagen "became Wellington's favourite charger and survived the `Napoleonic Wars when many other horses died under their demanding master.  Copenhagen himself died in 1836 and was buried at Stratfield Saye...Wellington said of Copenhagen, 'There have been many faster horses, no doubt many handsomer, but for bottom and endurance I never saw his fellow.'" Wellington: A Personal History, Christopher Hibbert.

"He carried the Duke of Wellington all through the Peninsular campaign and then all day at Waterloo, when the duke was in the saddle for 18 hours.  For any horse,that should have been enough; but the moment he dismounted Copenhagen lashed out and broke free; it took his groom half and hour to catch him.  He retired to the Wellington estate at Stratfield Saye, where the duke and his children continued to ride him for many years, eventually dying in 1836 at the age of twenty-eight, and being buried with full military honours."  A History of England: 100 Places from Stonehenge to the Gherkin, John Julius Norwich.

Copenhagen's gravestone is incised as follows...

"God's humbler instrument, though meaner clay,
Should share the glory of that glorious day."

Copenhagen endured the horrors of war with courage and without complaint.  He was a loyal servant to the Duke of Wellington.  We celebrate Copenhagen's life of glory and accomplishment.  He was not, unlike Joey in Warhorse, a mere victim. 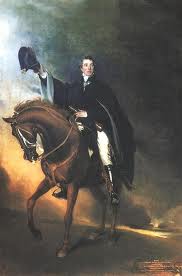