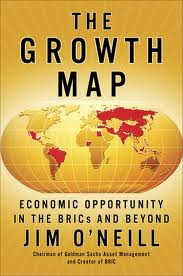 I came across this recently in Jim O"Neil's 2011 book "The Growth Map".  He is the Chairman of Goldman Sachs Asset Management and came up with the BRIC concept to describe the economic growth story of Brazil, Russia, India and China.

"It irritates me when I hear and read endless distorted stories of how only a few benefit and increase their wealth from the fruits of globalisation, to the detriment of the marginalized masses.  Globalization may widen inequality within certain national borders, but on a global basis it has been a huge force for good, narrowing inequality among people on an unprecedented scale.

Tens of millions of people from the BRICs and beyond are being taken out of poverty by the growth of their economies.  While it is easy to focus on the fact that China has created so many billionaires, it should not be forgotten that in the past fifteen or so years, 300 million or more Chinese have been lifted out of poverty.  In India the lives of many tens of millions have been similarly improved, and perhaps 300 million or more will join them in the next decade or two...We at GS (Goldman Sachs) estimate that 2 billion people are going to be brought into the global middle class between now and 2030 as the BRIC and N-11 economies develop.  The same is beginning to happen in some of the most challenging parts of Africa, and while it is very early days, the uprisings in the Middle East suggest that it could happen there too.

Rather than be worried by such developments, we should be encouraged and hopeful.  Vast swathes of mankind are having their chance to enjoy some of the fruits of wealth creation.

This seems to me to be hugely significant and grossly under-reported.  This message certainly does not seem to have made it to the Occupy Wall Street crowd where it would, I fear, be dismissed as "Banker" propaganda.

The overall BRIC story which has been THE economic story of the past decade is, in truth, a story about the triumph of free markets.  Brazil was brought free market reforms by Cardoso and Lula who brought inflation under control and stabilised the Real.  Russia morphed from a Soviet command and control economy into a booming resource rich free market economy with a flat tax which could be straight from Steve Forbes.  India has grown into a huge services and technology success story.  China has embraced a pragmatic free market model to chart its remarkable growth in spite of the Communist party.

Commander Kelly says, "check it out!"

eToro is the #1 forex trading platform for beginning and full-time traders.

Get professional trading signals delivered to your mobile phone daily.