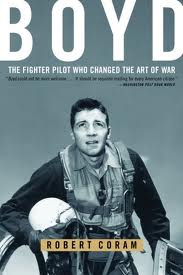 Last year I had the chance to read Robert Coram's excellent book, Boyd: the Fighter Pilot who changed the Art of War.

John Boyd grew up in Erie, PA.  He joined the army air corps and became a fighter pilot serving in WWII and the Korean war.  He went on to become a trainer of fighter pilots at Nellis in Nevada for the US Air Force.  He later joined the Pentagon and rose to the rank of Colonel.  He was outspoken in his views on military procurement (highly critical of swing wing aircraft, pentagon waste, etc.) and other matters--a true Maverick.  He later was one of the unofficial chief strategist of the 1990 Gulf War, Desert Storm.  I must confess to being slightly disappointed that Dick Cheney did not give him credit as such in his recent memoir, In My Time: a Personal and Political Memoir.  Boyd was one of America's great military men that almost no-one has ever heard of.

In addition to having had real hands on experience in combat, he was also an intellectual and theoretician of warfare.  His chief contribution to the science is the concept of the OODA Loop.  OODA is an acronym that stands for Observe, Orient, Decide, Act.   This provides an intellectual framework that can apply to ANY competitive endeavour from sports to business or armed conflict.

OBSERVATION: We begin with Observation (very Aristotelian, by the way!).  What is going on out there?  Is there a threat lurking around the corner?  What are our strengths and weaknesses?  What about those of the enemy/competition?  Do we have any allies or partners--real or potential?  We gather intelligence.  We take a reckoning.

ORIENT: Based on our Observations we move towards Orienting ourselves against any potential threats.  Do we need to shift right or left?  Which Axis threat is greater Germany or Japan?  Should we consider a flanking manoeuvre?  We Orient our forces.  Take careful aim.

DECIDE: We arrive at a decision.  The relative size of our organisation will often dictate the speed of our decision making ability.  Are we talking about one fighter pilot in his plane or are we talking about making a policy change at Microsoft?

ACT: Finally, it all comes down to Action.  It is not enough to come up with a plan, it must be executed as well.  After all the debates have ended it's time to pull the trigger.

OODA is always a loop because every act leads to subsequent observations.  We tried X and the result was Y.  Should we do it again, give it up, make a course correction?  New observations lead to re-orientations.  New decisions are formulated and new actions are taken.

Boyd's strategic question of of questions is simply, "How fast are you moving on the OODA loop?"  Are you slow and cumbersome or quick and lithe, like a Tiger?   How quickly can you move versus the competition?  Where are you relative to your competition on the OODA loop?

Corum's BOYD has been the best book on strategy that I have read in years.  Commander Kelly says, "Check it out, Tiger!"

Posted by Commander Kelly at 1:43 AM