What is less well known about Edith Cavell is she was herself an agent of British Intelligence--an unrecognized "Jane Bond."  The historian M.R.D. Foot wrote, "a story on which I have had to sit for a generation: that Edith Cavell, shot by the Germans in Brussels in 1915 for having helped scores of British soldiers to escape into Holland, had, in fact, been an exceptionally well placed spy, despised in the Secret service for having turned aside from her duty as a spy to perform a work of mercy."

Nicholas Rankin continues, "Cavell's work could not be acknowledged for the usual reason: the secret services have to stay secret in order to be effective.  She probably also suffered because of her sex and the popular view of it in the media.  Women did not have the vote then and they did not serve in the armed forces; feminine heroism was mostly framed in terms of self-sacrifice.  Thus to call nurse Cavell anything like a 'spy' (with all its lurid connotations then) would mean sliding her down the scale of female achievement, away from worthies like Florence Nightingale towards houris like Mata Hari.  Compromising her virtue might have diminished her propaganda value."  Source all quotes: Churchill's Wizards, Nicholas Rankin, 2008, (www.amzn.com/0571221963).

Long before James Bond was conceived by Ian Fleming, Edith Cavell was spying for the British in occupied Belgium.  Could Edith Cavell have been the model for the "unlucky" Bond girl (Severine's fate in Skyfall is not dissimilar to Edith Cavell's)?  We do know that many girls in Allied countries were named "Edith" after the war in Cavell's honor including the famous singer Edith Piaf.

Edith Cavell had a dog named "Jack" who was not executed by the Kaiser's firing squad along with his mistress and lived an additional eight years.   Jack is now stuffed and mounted in the collection of the Imperial War Museum (http://www.iwm.org.uk/) -- though sadly not on public display at this time.

You can now purchase Commander Kelly's  America Invades
here...www.americainvades.com or on Amazon...www.amzn.com/1940598427

You can now find signed copies of Italy Invades: How Italians Conquered the World here...www.italyinvades.com
or regular copies on Amazon...
www.amzn.com/1940598729 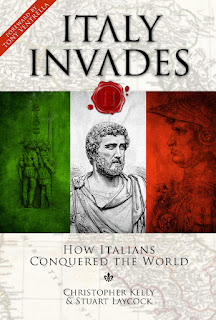