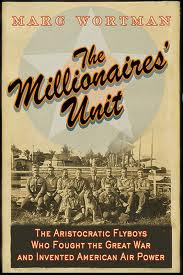 I was privileged to be invited (Thanks Jon Shields!) to see a rough cut of an inspiring film The Millionaire's Unit (http://www.millionairesunit.org/index.phpoption=com_content&task=view&id=20&Itemid=34)
in a screening in London recently.  This film has not yet been finished or released to the public.  The anticipated release date is 2014.

The documentary tells the tale of the dawn of naval aviation in the USA.  The book that the movie is primarily based on is The Millionaire's Unit (http:/www.amzn.com/B000MGBPBK) by Marc Wortman.  This terrific book tells the story of Ivy league men who learn to fly and prepare themselves for American involvement in the First World War.  These men were motivated by old-fashioned notions of service and duty that were encouraged by institutions such as Groton School and Yale University.   I recall looking at Groton School (motto: "Cui servire est regnare -- to serve is perfect freedom") yearbooks from 1917 that showed students drilling on the grounds of the grass Circle that formed the heart of the school.  Many of the veterans of the First Yale Unit would go on to become leaders in business, government and espionage.

Trubee Davison was the son of Henry Pomeroy Davison, the President of JP Morgan.  He attended  Groton and then Yale, where he joined Skull and Bones. As a young man at the dawn of aviation history he longed to fly.  While on vacation with his family in Paris in 1915 he volunteered to serve in the American Ambulance field service.  He convinced his father to finance the equipping and training of a Yale Naval air squadron before the USA led by President Wilson had joined the allies in the First World war.  He was the leader of the First Yale Unit who was seriously injured, breaking his back while flying an air test of a Seaplane off Peacock point on Long Island in July of 1916.  The leader of the First Yale Unit was ironically unable to join his comrades in combat when the US declared war on Germany in April 1917.  In 1951 he became the CIA's first personnel officer.

Robert Lovett served as a gunner in bombers during the First World War in the First Yale Unit.  He flew several missions which targeted the German submarine pens in  Bruges.  "Lovett developed the first U.S. strategic bombing force, which would become the model for U.S. military aviation for the rest of the century (see earlier post, Duxford and George Carlin, 4/30/12).  After the war, Lovett served as undersecretary to General George C. Marshall at the State Department.  Dubbed a member of the “Wise Men,” along with Averell Harriman, Dean Acheson, and George Kennan, he helped formulate the Cold War strategy and became acting Secretary of State during the Soviet Union’s blockade of Eastern Europe.   Lovett was called back from Wall Street in 1951 to serve as Secretary of Defense during the Korean War. Until the end, he advocated air superiority as the surest way to keep the United States strong and safe."

Artemus "Di" Gates was a starting tackle for the Yale football team.  This lanky midwesterner would go on to become one of the most decorated American airmen of the First World war.   After the war he became the President of New York Trust, a predecessor to J. P. Morgan Chase & Company.  Gates also served on the boards of Pan American Airways and the Boeing company.

David Sinton Ingalls became the only American naval ace of World War I with five confirmed kills.  Other members of First Yale Unit such as Kenneth MacLeish (brother of Archibald Macleish) and Albert Dillon Sturtevant paid the ultimate sacrifice for their country.

It is interesting to note that the ROTC program was only recently re-established on the Yale and Harvard campuses in 2011  http://www.nytimes.com/2011/05/27/nyregion/yale-to-restore-navy-rotc-program.html.

Special thanks Derroch Greer (producer/director) and Harry Davison (producer) of The Millionaire's Unit documentary.  If you would like to join me in contributing to the completion of this film Commander Kelly would encourage you to visit the web site for the details...http://www.millionairesunit.org/index.phpoption=com_content&task=view&id=20&Itemid=34

Posted by Commander Kelly at 5:57 PM