There is a surprising connection between the first significant invasion by American troops of a foreign land and George Washington's home at Mount Vernon.

We tend to assume that we know all about George Washington because his legend is so familiar...chopped down the cherry tree, land surveyor, successful General, virtuous first President, father of our country with his image on the quarter and one dollar bill, etc.  But there is a little known Washington that lurks behind the legend.  Did you know, for example, that George Washington had a brother?  More precisely he had a half-brother named Lawrence Washington (1718 - 1752).  His brother played a role in the very first American invasion which did not even take place in north America.

In the Columbia chapter of America Invades we lay out the relevant history...

"Even before our nation had been founded, Colombia was the site of the very first large-scale American invasion of a foreign country. During the War of Jenkins’ Ear in 1741, the Royal Navy Admiral Edward Vernon, known as “Old Grog,” landed a party of British and about thirty-six hundred American colonial troops in an assault on Cartagena, Colombia. They failed to take the city and suffered heavy losses from disease. Lawrence Washington, George’s older half-brother, participated in the Colombia expedition. George Washington’s Virginia home, Mount Vernon, was later named after the British admiral."

George Washington, after inheriting Mount Vernon from his brother who died at age 33, chose to retain the name honoring his memory and that of his commanding officer. 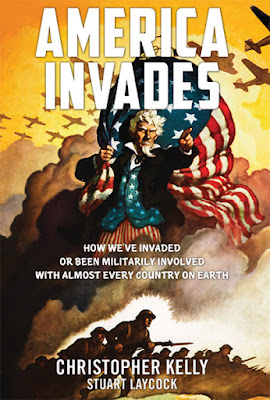 Posted by Commander Kelly at 5:11 AM