On October 21, 2013 the HMS Victory (http://www.hms-victory.com/), Lord Nelson's 104-gun flagship, marked the 208th anniversary of the Battle of Trafalgar.  This is the only ship that remains from this decisive British victory over the Franco-Spanish Fleet.  Though Victory rests in a dry dock it continues to be a serving ship in the royal Navy.  Queen Elizabeth II had dinner in Nelson's cabin on the bicentennial of Trafalgar in 2005.

Admiral Villeneuve and his Franco-Spanish fleet outnumbered Nelson's by 33 ships of the line to 27.   This did not deter Nelson from launching his fleet straight at the enemy as soon as the opportunity was presented itself.  The wooden ships of the Royal Navy were all that stood between Napoleon's Grande Armée
Grande Arm
camped at Boulogne and England which had a pitifully small army.

Nelson sent out the signal that "England expects every man to do his duty".  The two straight lines of Royal Navy ships sailed straight towards the Allied line taking fire particularly in the sails as the French tended to aim high in order to slow and dis-mast their opponents.  The British, on the other hand, preferred to aim low where they would kill the crews of their opponents.

22 Americans, many of them 'pressed men', did their duty on board the Victory that day.

Captain Lucas of the French ship Redoubtable had sent French infantry soldiers armed with muskets into the rigging of his ship to fire down on the English ships.  The Victory approached the Redoutable.

"On the quarterdeck of the Victory Nelson paced to and from.  He was wearing a blue coat decorated with gold epaulettes and his four orders of chivalry embroidered on his left great.  Although advised before the action to change ion a plain coat to avoid identification, he had refused, saying there was no time.  Probably he was sighted by one of Captain Lucas's snipers in the mizzen-top of the Redoubtable or perhaps it was a random shot, but at twenty-five minutes past one Nelson jerked, dropped to his knees and rolled on to his side, shot through the shoulder.  Hardy ordered him to be carried below, the admiral spreading his handkerchief over his face so that he should not be recognised,  He was laid in the cockpit on the orlop deck below the waterline, where the surgeon and his mates worked on the wounded, bandaging tying tourniquets and amputating arms and and legs.  As Hardy leaned over him, Nelson said 'Hardy , I believe they have done it at a last, my backbone is shot through' and when William Beatty, the surgeon began to cut away his clothing, said, 'You can be of no use to me, Beatty, go and attend those whose lives can be preserved.'
Nelson lay dying in the dim light of horn lanterns; as the concussion of broadsides shook the ship and this about him strained to hear his whispers a giants the thunder of the guns and the scream of the wounded, his words were remembered...Nelson muttered, 'Remember me to Lady Hamilton.  Remember me to Horatia (his daughter and only child...CK)...I have left  will and left Lady Hamilton and Horatia to my country...My sufferings are great but they will soon be over...yet one would like to have a little longer, too...How dear is life to all men... God be praised, I have done my duty.'"  (Source: The Terror Before Trafalgar, Tom Pocock, 2002, www.amzn.com/1909609676).

Nelson's body, unlike most of those killed at Trafalgar, was not tossed over the side of the ship.  Instead his body was preserved for the voyage home in a wooden barrel of spirits.  Some allege that the barrel was nearly dry when the Victory returned to Britain.

Nelson's decisive victory at Trafalgar meant that Britain would rule the waves for more than a century.  Napoleon's invasion plans would be frustrated.  Sadly, the British government turned its back on Lady Hamilton and Horatia.  Lady Hamilton descended into alcoholism and died in penury in France.
The best way to toast Nelson's memory is with a "Nelson's Blood" cocktail.  There are many variations on the theme of a "Nelson's Blood" cocktail.  Here is the one my friends and I tried at a pub in Portsmouth...it was delicious!

Directions: Pour the port, brandy, rum, and orange juice and orange bitters into a cocktail shaker with cracked ice and shake. Strain into a large, wide brandy (cognac) glass, with a few ice cubes in it. Pour in the lemonade carefully to top off, then garnish with a twist of orange peel and serve.

Kelly's latest book, An Adventure in 1914, can be found here...www.anadventurein1914.com 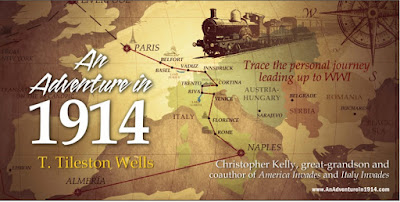 Posted by Commander Kelly at 4:50 AM

Thanks for this blog about the HMS Victory
I have read Bernard Cornwell's "Trafalgar" and of course all the Hornblower series
They include lots about Adm Nelson and life in the British Navy of the day
A grim and occasionally exciting life!
Glad to read about this museum!