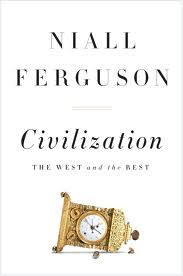 
"Western civilization appears to have lost confidence in itself.  Beginning with Stanford in 1963, a succession of major universities have ceased to offer the classic 'Western Civ." history course to their undergraduates.  In schools, too, the grand narrative of Western ascent has fallen out of fashion.  Thanks to an educationalists' fad that elevated 'historical skills' above knowledge in the name of 'New History' -- combined with the unintended consequences of the curriculum-reform process--too many Britisish schoolchildren leave secondary school knowing only unconnected fragments of Western history: Henry VIII and Hitler, with a small dose of Martin Luther King, Jr.  A survey of first-year History undergraduates at one leading British university revealed that only 34 per cnet knew who was the English monarch at the time of the Armada ("Elizabeth I, who any visitor to London can interview quite easily these days inside Westminster Abbey--she's a great listener, by the way." Commander K.), 31 per cent knew the location of the Boer War ("South Africa. " Commander K.), 16 per cent knew who commanded the British forces at Waterloo (more than twice that proportion thought it was Nelson rather than Wellington*) and 11 per cent could name a single nineteenth-century British prime minister.  In a similar poll of English children aged between eleven and eighteen, 17 per cent though Oliver Cromwell fought at the Battle of Hastings ("Hastings fought 1066, Cromwell born 1599" Commander K.) and 25 per cent put the First World War in the wrong century. ("20th Century." Commander K.)"

Would American children fare any better than their British counterparts?  Not according to this Boston Globe article where a majority of US 4th graders don't know why Abraham Lincoln was an important American...http://www.boston.com/bostonglobe/editorial_opinion/oped/articles/2011/06/19/dont_know_much_about_history/.

Nor is broad historical ignorance limited to students and the young.  Millions of movie goers who recently saw Spielberg's Lincoln, which I enjoyed, may be forgiven for believing dubious propositions such as 1) Lincoln struck his son Robert (http://www.washingtonpost.com/blogs/house-divided/post/lincoln-experts-impressed-with-lincoln-the-movie/2012/11/21/534630ca-33f9-11e2-bfd5-e202b6d7b501_blog.html 2) that Tad Lincoln learned about his father's assassination in a theatre or 3) that Thaddeus Stevens used the original version of the 13th amendment as an aphrodisiac with Lydia Hamilton Smith -- his quadroon housekeeper with benefits (http://barrybradford.com/2012/11/is-the-lincoln-movie-historically-accurate/).

Even our recently re-elected Havard-educated President has shown remarkable gaps in his historical and geographical knowledge: "campaigning in all 57 states" in 2008, "Polish death camps" in World War II (http://www.nydailynews.com/opinion/words-polish-death-camps-cut-deep-article-1.1087670?localLinksEnabled=false), The "English Embassy" http://www.dailymail.co.uk/news/article-2068137/President-Obama-blunders-condemns-attack-English-Embassy-Tehran.html, and confusing the Malvinas / Falkland Islands in the South Atlantic with the Maldives in the Indian Ocean (http://www.telegraph.co.uk/news/worldnews/southamerica/falklandislands/9207183/Barack-Obama-makes-Falklands-gaffe-by-calling-Malvinas-the-Maldives.html).

Commander Kelly says, "Go see Westminster Abbey in London (http://www.westminster-abbey.org/) and get a taste of the glory of Western Civilization and history!"


* That would have been quite a trick given the fact that Nelson was killed at the Battle of Trafalgar in 1805 and the Battle of Waterloo was fought in 1815 (see earlier posts, Nelson Champion of Liberty 1/15/12 and Day out with the Duke of Wellington, 1/27/12).

Posted by Commander Kelly at 12:42 AM