I know what you are thinking.  "Ye Gods, another book on Churchill?  What fresh insight can really be forthcoming on the well-chronicled life of Winston Spencer Churchill?"  But David Lough HAS managed to plough new ground by going deep into the weeds of Churchill's tortured relationship to money.
Churchill was a lifelong risk-taker.  As a boy he injured himself by jumping off of a bridge rather than being caught in a game that resembled "tag" (described in Churchill's classic work My Early Life...www.amzn.com/0684823454)  He banged up his arm playing polo in India.  He participated in the last great cavalry charge at the battle of Omdurman in 1898.  He volunteered to cover the Spanish American War as a war correspondent.  He took up flying in the earliest and riskiest days of manned flight.  So it should really not come as any great surprise that he took risks with money.

David Lough's No More Champagne: Churchill and His Money (www.amzn.com/1250071267) documents Churchill's financial risk-taking behavior in exhaustive detail.  Churchill, despite his aristocratic background, was never a wealthy man.  True he was born in Blenheim Palace, but he never become Duke nor own a palace.  The son of Lord Randolph Churchill did, however, acquire extravagant tastes.  He famously once remarked, "My tastes are simple: I am easily satisfied with the best."  Champagne, liquor and Cuban cigars consumed much of the Churchill household budget.
Churchill, unlike many of his contemporaries, did not marry for money.  Clementine Hozier was from a good but not well to do family.  Churchill would work extremely hard to make a living and support his large family.   He lived by his wits, writing nearly all his long life.  He wrote journalism, he wrote autobiographies, and, most of all, he wrote history.  The Second World War was his six volume telling of his version of the war (www.amzn.com/039541685X).  It sold over 2 million copies and helped earn him a Nobel prize for literature and 12,000 pounds tax free in 1953.  Churchill prophesied, "History will be kind to me for I intend to write it."

Churchill was a lifelong inveterate gambler.  He gambled with his life.  He gambled with his cash often usually losing at the casinos of France and Monte Carlo.  This tended to drive Clemmie crazy as her own brother had committed suicide in a Paris hotel room after racking up gambling debts he could not pay.  Near the end of his life Churchill became a horse breeder.  He enjoyed surprising success with horses such as Colonist II who won 9,000 pounds of prize money in 1950.

Churchill was a "plunger" who loved to pick individual stocks when his purse could afford it.  He took investment advice from Bernard Baruch.  He also lost a fortune during the Wall Street Crash of 1929.  Churchill depended often on the kindness of strangers.  The desperate state of his finances was bailed out by generous interest-free loans from sympathetic men such as Sir Henry Strakosch, a mining baron who also owned an interest in The Economist.  He accepted the hospitality of Aristotle Onasis for the sunset of his life.
Churchill fought a lifelong battle with Inland Revenue (the British equivalent of the IRS).  During the 1940s the tax rate on higher income individuals soared to a whopping 98 and 1/2 percent.  This was a major disincentive to realize ordinary income for his writing and speaking activities.  He sought relief in a variety of complex tax dodges.  His home at Chartwell was donated to the National Trust.  He negotiated publishing payments as capital gains rather than ordinary income.  He disputed Inland Revenues contention that he was an artist after accepting a generous payment from Hallmark for use of his paintings.

Churchill's financial affairs were occasionally conflicted by his ministerial duties but these were commonplace for the time.  Lough poses an intriguing question in his book's summation when he asks "whether Churchill would have survived scrutiny by the standards of his own day if the details of his finances had become public."  Lough concludes that the press was right to turn a blind eye as "there is no sign...that Churchill ever lined his own pocket while controlling large amounts of public expenditure."

Special thanks to my father in law, Dom Driano, for his kind gift of No More Champagne. 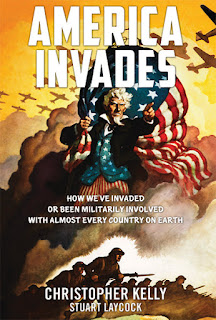 You can find signed copies of America Invades here...www.americainvades.com
or regular copies on Amazon...www.amzn.com/1940598427/

An Adventure in 1914
is now available to pre-order...www.anadventurein1914.com
Or on Amazon Kindle...www.amzn.com/B01LXD1KHQ 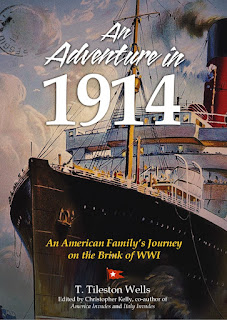 Posted by Commander Kelly at 4:11 AM